When Julianna was born, it didn’t take long for us to understand that her development was going to lag, and that there was no way to predict by how much. Thirteen and a half months later, we still don’t have a very clear idea. However, I’d like to share with my family and friends what “developmental delays” mean for us.

I’ll start with Alex, because his development is like that of most other children. From the day he was born, he began changing. Changing the way he looked, the way he acted, the skills he was able to perform. I spent his babyhood expecting to see changes from week to week, and sometimes from day to day. He learned to sit up, and three days later he was pushing up into sitting. Crawling took a lot longer, but the minor steps on the way to crawling happened at regular intervals.

Today, that pattern continues. Every day he does something new, even if it’s as simple as picking up on one of Christian’s or my mannerisms. (“Awk!”, which I have come to realize is a supremely Midwestern corruption of the supremely German “Ach,” is killingly funny, as is “That’s cool!”) Alex’s level of development, therefore, was and is a constantly shifting paradigm.

By contrast, Julianna has to be guided/manipulated/forced into every new thing—well, the major ones, at least. Once in a while she surprises me with some new skill or some new evidence of understanding—the most recent being the “honk the nose” game, which my dad invented when Alex was a baby. But basically, we have to take her to the next developmental level. We took her hand and guided it to the toys. Then we took her hand and guided it to the food—which she wasn’t looking at. Then we pounded on the tray to get her to look down. And even with those baby steps, it took months. If we don’t take the lead, she doesn’t particularly change at all. Until she does. There have been two times in her life when she suddenly did a whole bunch of developing all at once. Those are good times. 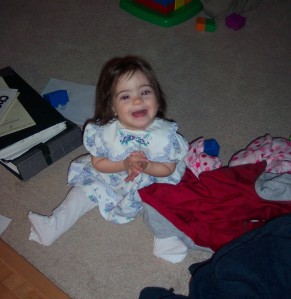 But in between, long months go by in which I am waiting for the next milestone… and she stays basically the same. It’s easy to take a snapshot and say that my 13-month-old is functioning at about an 8-month level. It’s much harder to communicate the experience of what those 13 months were like. At some point, my expectations shut down. Not entirely, of course. Gerti, our PT, tells me that I still have high expectations for Julianna—but to me, my expectations are so miniscule as to be not worth mentioning. They involve such basic things. Like being able to crawl, feed herself, and walk, so that we can try to have another baby.

It’s exhausting to spin out the implications. What if I forget to teach her something? Is she going to have the natural curiosity that allows Alex to rocket from one level of understanding to the next? My rational brain (objective) tells me that she will do it all, it’s just going to take longer.

My experiential self, however, sees an unending babyhood. It’s not that I don’t believe she’ll develop; it’s that I don’t see the light at the end of the tunnel. It’s like being on a railroad track without a map, and you have no idea where the next station is, or how long it’s going to take to get there. And meanwhile, you can’t particularly do anything. You can’t get off, you can’t make plans for sightseeing at the other end—you just have to wait. And what happens when you need to use the bathroom???? 🙂

Anyway, on paper (or online) it looks very depressing. And I can’t deny that it is disheartening. But I’m not blogging to create a big pity party. Rather, I want to share the experience with my loved ones and anyone else who happens upon this, to give you some sort of idea, in the name of empathy.

Because she really is the sweetest part of my life. 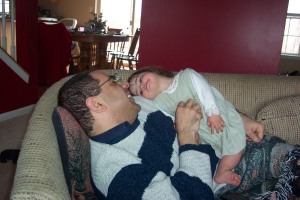