It’s been a month now since Julianna started crawling, and although she does so in fits and starts, though she is anything but speedy, it has completely changed her world. And ours. She’s into everything now—pulling over trash cans, playing with microphone cables and power cords, trying to pull up on the kitchen drawers. She isn’t quite the tornado that Alex was—not yet, at least—but she wreaks quite enough destruction anyway.

She gets in Alex’s face at every possible opportunity. It drives him crazy. He loves her to death, but sometimes he just wants his space. Not to mention his toy. But it’s a lost cause. The sun rises and sets wherever Alex is. She will be perfectly content by herself, or with me or Daddy (especially Daddy), but when Alex comes in the room, her body language changes, her eyes light up.

In the absence of Alex, she goes after anything she can reach. For instance: toes. She really has a thing with toes. And now, in the height of summer, I have a lot of barefoot students downstairs. I can’t count how many times a student will stop playing and squeal, jump, or just get a strange look on her face. Then we’ll both look down to see Julianna with her hand on my student’s foot, staring up as if my student is the most interesting thing in the world right now. Then she grins and giggles till we start laughing, too.

The students claim that it doesn’t bother them, but I feel quite conflicted about it. When Alex was in that phase, I kept him on my lap, I kept him occupied, or I hired a babysitter. Julianna’s so calm that I don’t want to spend money on a babysitter, but I know it must be distracting. I know I should be controlling my child better, but how can I stomp all over her enthusiasm? I don’t want to restrain her from anything, because she needs those experiences so much more than most children of her developmental level. (Incidentally, that’s now in the 11-12 month range.)

OTOH, I know she also needs the lesson on appropriate and inappropriate behavior at least as much as other children of her developmental level. But I’m afraid that if I stop her, she’ll learn the lesson too well. It would be tragic if she lost that tremendous fire to learn and explore—and develop! 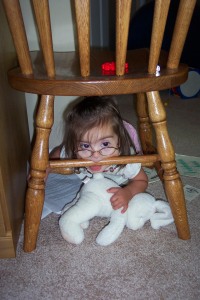