Which one is softer, his silky, thick dark hair, or his velvet-satin skin? I can’t decide…but I’ll never get tired of stroking his head and cheeks, his tummy and arms, trying to make the decision.

What more beautiful gift could the world offer than going back to sleep in the dark early morning with a little morsel of humanity tucked into the crook of my arm, and waking with the sun streaming through the windows?

Everyone keeps saying that Nicholas looks just like Alex as a baby. They do look similar, but no more than the natural similarity of brothers. As you might imagine, Alex doesn’t care for this comparison, either. J Yesterday, he asked me what he looked like when he was a baby. “Well,” I said, “your hair was a little lighter, and there wasn’t quite so much of it. And you had a big thing sticking up out of the back of your head, because you tried to come out the normal way, but you were too big.”

That was the limit of Alex’s interest, but not mine. And as I sat there reflecting, Nicholas opened his eyes and looked at me, and I saw another very striking difference between the boys. Both babies have/had wonderful slate-gray eyes. (No blue eyes in this family—slate gray turns chocolate brown.) But when Alex was this age, he stared at me as if he was trying to memorize my every feature. Nicholas, on the other hand, looks like he just knows something. I keep blinking and going, “What? What are you thinking, Baby?” 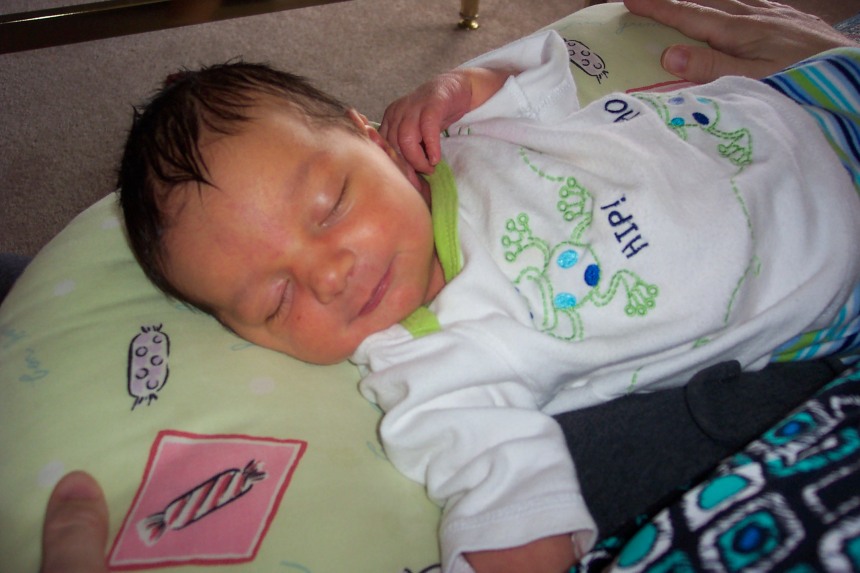 Babies suddenly look so much more real, somehow, when they wear clothes, instead of those tie shirts the hospital nurseries put on them. Monday, Alex and I spent the day pulling out the boy clothes. But when I started trying to dress Nicholas, I was struck by the great difference that two pounds makes. Not even. A pound and a half. The clothes that fit newborn Alex like a glove, Nicholas positively swims in. Okay, I know Alex was a monster at 10 6. But come on, Nicholas weighed virtually 9!

They are beautiful, these early spring days with our family of five. But also passing in a haze, as you might expect. And that brings me to the one child who has not been mentioned yet. Julianna has been virtually absent from the family this week. Since the adventures of Sunday evening, she has spent almost all day and all of every night sleeping. What little time she spends downstairs with us is spent 90% on Christian’s shoulder. The other 10% is spent whining in whatever position she is, because she’s NOT on Christian’s shoulder. She is truly a very sick little girl, and I’d be a lot more panicky if we weren’t preparing to pack the family off to the doctor’s office in a few minutes.

It’s hard on us all. On me, because I can’t pick her up and snuggle her, and it’s gone on long enough now that she doesn’t want me at all; she whines because I’m not Daddy. On Christian, because he already has to pick up so much other slack around the house because of my wounded abdomen. And on Alex, because with Daddy preoccupied with Sister, and Mommy preoccupied with Brother, what’s left for him? We’re trying, but this week he’s decided he doesn’t want to play alone. He’s hardly gone down to the toy room at all; he would rather stay upstairs with us and gripe because we aren’t playing with him. I feel terrible about it, even knowing that it’s part of the transition process. There has been acting out, a lack of cooperation…alongside beautiful moments, like this morning, when he spent 45 minutes trying to entertain Nicholas with every baby toy in the house…even though Nicholas was fast asleep. (Hehehehe)

It has taken me six hours to draft this post, so I don’t think I’m going to attempt to edit and polish. Time to roust the 4-year-old from nap and get everybody in the car. How am I ever going to get any other writing done?????

2 replies to Raptures, Reflections and Regrets