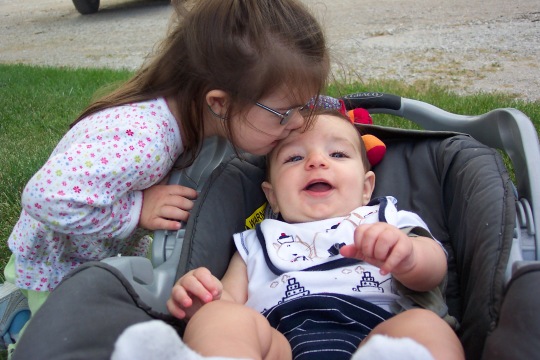 My critique partners are always scolding me to describe my characters better. Even the unimportant ones. “It doesn’t have to be much,” they tell me. “We just need some sort of mental image.”

Writing books and articles suggest coming up with one or two idiosyncrasies, and keep bringing them back. Like a person who always has a toothpick in his mouth, or a guy with a comb-over. It makes sense; we don’t want to waste time adding weight and importance to a minor character. So we write short, pithy descriptors based on a person’s most notable traits.

When we first entered the world of special needs, we had a lot of trouble with political correctness. We had to learn that the words “that’s retarded” are derogatory in all situations, always. We learned terms like “differently-abled,” which is the kind of thing that makes people’s eyes roll. We found it ridiculous that the phrase “Down’s kid” was considered unacceptable; that the appropriate term was “child with Down syndrome.” The rationale is: don’t define a person by their disability. She is a child first, disability second. What difference did it make? we thought. Julianna’s disability is built into her genetic makeup, into the very fiber of her being. Acknowledging that is no shame.

But these days, I think differently. Everywhere we go, Down syndrome is the topic of conversation when Julianna is around. Like skin color or relative tallness or shortness, DS is what people see when they look at her. But here’s the trouble. When we classify a  person on his or her skin color, it’s called racism, and as a society we struggle to remove that plank from our eye. But for some reason, that isn’t true of disability.

The thing is, however much Julianna may embody the common traits of people with Trisomy 21, there is so much more to her! When people talk about Alex or Nicholas, they talk about long lashes, brown eyes, imagination, energy…the list goes on and on. Why is it that with Julianna, people stop paying attention at the extra chromosome?

I ask this mostly rhetorically. I know that people generally have the best of intentions. They want to tell me what a blessing people with DS are. They want to acknowledge the way having a child with special needs affects our family. They want to show they care by asking after Julianna’s health and development, knowing both to be somewhat fragile and fragmented. (Although taken as a total person, Julianna is anything BUT!) And I bring it up a lot, because I get tired of the awkwardness when I can see people thinking, “Does she or doesn’t she?”

Nonetheless, the fact remains that stereotypes, generalizing, lumping together—all those things that are taboo when discussing race, gender, or sexual orientation—these are fair game when it comes to disability. And this is just wrong. It allows people to appear benevolent and open-minded even while they distance themselves—while they keep people who are different than they are at arm’s length. It’s yet another wall. And there are no walls in Heaven.