We spent last week on Longboat Key, Florida with the Basi family, and since we were so close, Christian and I decided to try a Magic Kingdom trip with the kids for one day. We went with some trepidation about the long day, but it turned out to be perhaps the highlight of the trip.

First, though, let me say that I first visited Disney in 1980, when I was not quite five years old. This was me:

In this case, it was Disneyland, not Disney World. In fact, last week was my first DW trip, and somehow it didn’t seem as magical as it did when I was 5, 7, and 12 in California….though that’s probably 90% age-related! Still, as I looked back through the slides of that first trip to find the picture, I saw things that were totally different, (and better), about California. Things like the outdoor approach to Small World, and Storybook Land, which DW doesn’t have. And it makes me anxious to go back to California to see what is and isn’t still there.

But I digress. Here is what I learned at Disney World last Tuesday, December 29th, 2009:

1. Staying at one of the resorts is worth every penny. We stayed at the second-lowest tier of resort—the Caribbean Beach. A pirate room, they told him, to which Christian rolled his eyes and said, yeah right. Until we opened the door to this:

2. Reason #2 it’s worth it to say at the resort: you get access to the park an hour ahead of everyone else. Thus, on December 29th at 6:55 a.m., we were walking down Main Street USA:

And before the sun rose, we had ridden Dumbo…

…and Peter Pan twice each. We were also really cold, which leads me to…

3. Just because it’s going to be what I would call “spring” weather in Florida does not mean a jacket is enough coverage! And don’t forget the blanket for the baby, who lost three socks in the Magic Kingdom, and had to spend much of the early & late hours of the day in arms, with jacket pulled around him, to keep him warm.

4. On a related note, my b-i-l told us to freeze bottles of water and bring them along so they’d melt & be cold water all day. This is a terrific idea—when it’s 95 degrees outside. When it’s 45-60, mostly you just have ice all day.

5. People are essentially lazy on vacation, which means that those of us who are willing to get up without enough sleep have a big advantage in enjoying the park. It didn’t get crowded till lunchtime, and after that it took twenty minutes to cross from one world to another through the castle square.

6. Speaking of sleep… I learned that children are capable of sleeping in the unlikeliest of positions:

Let’s take a closer look at that, shall we?

7. It is possible to enjoy Disney even when there are 75,000 people in the park.

8. The place is mind-boggling. I can’t imagine the sheer acreage owned by the corporation. Disney claims every exit for five miles along I-4. Epcot, Downtown Disney, Animal Kingdom—they have their own exits. Widely-spaced exits. When we got off the highway, we took the first left (into the Wyndham) to get directions to our hotel, which wasn’t where it was supposed to be. After turning INTO the Wyndham resort, we drove 1 ½ miles of completely undeveloped land (two lanes each direction) before we reached t he GUARD HOUSE. And when we got on the shuttle to go to the park, we drove for FIFTEEN MINUTES of largely unincorporated acreage. What are they planning to DO with all that land???

9. Last, but not least…We were told, but I had forgotten, that families with disabled kids get preferential treatment for rides. Probably I forgot because to me, we really don’t qualify. Julianna’s a slow developer, that’s all.  It’s not like she can’t walk.

But late in the afternoon, while Christian & Alex stood in a 50-minute line to drive race cars, I took the little ones on the carousel. After that we still had half an hour, so I thought we’d go check out Small World. But that line was 40 minutes long, so I was walking away when the woman I’d asked came running after me. “Does your daughter have Down syndrome?” she asked. “You should never wait in a line. You can get this pass and they’ll let you in the wheelchair entrance.”

Well…okay. I went and talked to the woman manning the wheelchair entrance for Small World, and before I knew it, we’d gone from a 40 minute wait to straight down the ramp and onto the next boat.

After Alex & I used our “fast passes” to ride Peter Pan one last time, we went to inquire, and came back with a pass that says you can use your stroller as a wheelchair. Meaning you can take it in with you and park it where the park staff is helping people load and unload. That may sound piddly, but that is a BIG perk. Otherwise you have to park it and haul anything valuable with you. Not to mention, they put you on pretty much as soon as you get there, meaning you bypass the entire line.

We used the pass twice more. The park staff were all very nice about it, though some were more suspicious than others. Particularly at the Buzz Lightyear ride. I felt really bad about that one, actually. I didn’t even want to ride the stinking thing again—totally not my thing to shoot lights at batteries while holding a baby on my lap. Julianna had no interest, either—but the only way to get in quickly was if she came along. So while other people waited for 80-90 minutes, we zipped through in about 15. It felt like a gross abuse of the privilege, especially since they put me in my own car. They could’ve loaded two people through who actually WANTED to shoot light bulbs at batteries.

It’s great that Disney is accommodating families with special needs kids. I think they meant it for people with conditions like c.p.—kids who physically can’t get in the car without help. We saw that several times—people being lifted, carried, onto the moving walkways, placed in the cars like a small child. It was just so clear that, at least in this case, we have it so much better.

Disney at Christmastime is lovely, so I’ll leave you with more pictures, and if you are really interested, here’s a link to my Facebook album, which has the whole trip on it. 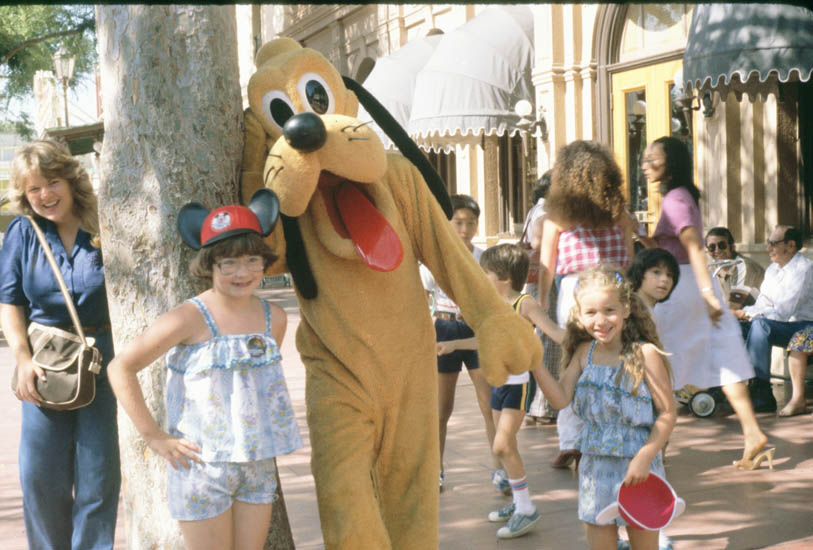 8 replies to Florida Reflections: What I Learned About Taking Three Small Children to the Magic Kingdom for One Day