Like all school kids, I adored Spring Break—no school, no homework, but not yet on summer schedule (i.e., two hours in the garden before the heat of the day).

In college, I was by turns envious and annoyed with the spring break mentality of an escape to someplace warm. Envious when I thought about traveling. Disgusted by the idea of getting trashed and trashing the beach.

But now? Spring break just means I have three kids at home.

But that’s an awful attitude to take. So when I saw that the weather was going to be spectacular this week, I made a vow: no housework, no writing, was going to get in the way of enjoying the week with my kids.

And so on Monday, we invited a friend to picnic with us at the park. Alex climbed all over the waterfall and the little ones gloried in slides and swings. Then Christian came and joined us for lunch. 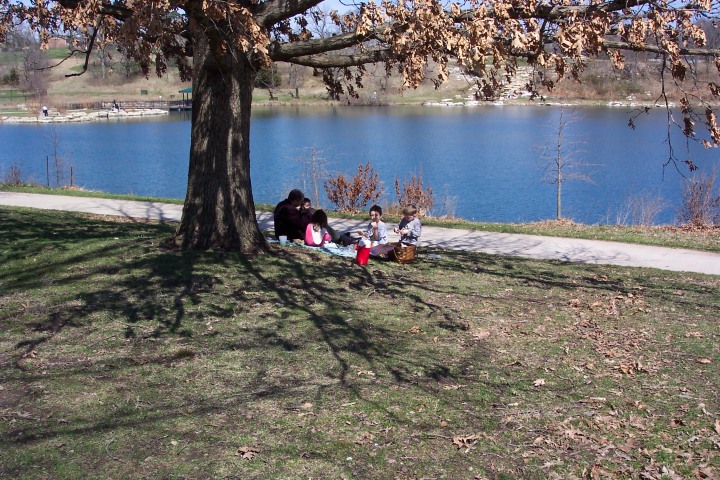 On Tuesday, we went to another park across the street from the eye doctor’s. (Julianna broke her glasses a couple of weeks ago, and we had to go pick them up.) When we left, we saw that the humongous crane downtown was in motion, so we stopped to watch a construction site for a while. Alex and I kept yelling, “Wow, look at that! Awesome!” while Julianna and Nicholas fidgeted in their car seats and whined. Back at home, we found a voice mail from the neighbors inviting Alex to play. That afternoon he came home with big news. Dramatic sigh: “E__ and W__ said they were gonna marry me.”

Wednesday we decided it was a beautiful day for trip to the St. Louis Zoo with friends. Oddly enough, so did everyone else in the state. J At one point during the day I put the older two on the train with their friends…

…and went to nurse Nicholas under the shade of a bud-broken redbud. When we returned to the station, we found that the trains were “stuck.” So I got to spend forty-five minutes listening to the “Boogie Woogie Choo-Choo train” over and over while Nicholas tried, with increasing mischief in his giggles, to escape through the “exit only” turnstiles onto the track. Good times.  🙂

We navigated the worst rush hour I’ve ever seen in St. Louis—over an hour to go twenty miles—and the delay meant that we had to stop for dinner on the road and bypass home to go straight to church for choir practice. We got home at 9p.m., sunburned and exhausted.

Today begins Triduum. For us, today will be a detox day ending in a long Mass.

Two days to the end of the fast! Happy Triduum!