On a lovely fall afternoon in 2008, when my oldest was 2 ½, I came home from running errands, fuming about the wreaths and baubles hung all over the mall. My husband listened patiently to my yearly tirade for a few minutes. Then, he came over to me, took both my hands in his and looked deeply into my eyes. “Kate,” he said gently, “you have got to make peace with Santa Claus, because we are going to have Santa in this house.”

His words took the wind right out of me. I’d known this day was coming ever since Alex was born, but I’d been dreading it. As a choir baby, a volunteer musician and finally a paid liturgy director, my whole life was steeped in the brew of the liturgical seasons. The beauty of this time of year is the journey of preparation for a Christmas that begins on December 25th and lasts twelve days—not one that consists of a month-long shopping spree beginning the day after Thanksgiving, chopped off unceremoniously after Christmas dinner.

As far as I was concerned, Santa Claus was the symbol of everything that was wrong with Christmas. Every year, as Advent disappeared beneath an avalanche of sale ads, I got angrier. How could we dismiss Advent—that season of holy hush, of restrained excitement, of examining our hearts and defragmenting our scattered souls?

We set Christmas on a pedestal of expectations for peaceful, nostalgic bliss. But how often do we end up feeling worn down, stressed and disillusioned instead? I think it happens when we get too focused on the wrong things.

Christmas is not about kids. It’s not about gift-giving. It’s not even about family, though that’s a closer miss. Christmas is the celebration of the Incarnation: God coming to earth to dwell among us, as one of us, a gift that finds its full meaning not in a baby’s birth, but in a grown man’s Crucifixion and Resurrection. In salvation.

Such were my yearly frustrations. But the pitfall to justified outrage is the tendency to swing too far in the other direction. That was me: angry, frustrated, and unable to find joy in the beauty of the season. But when my husband stood in front of me that afternoon, his words pierced the armor of self-righteous indignation, and I realized I had to find a better path.

Turns out, a better path really wasn’t hard to find. All I had to do was organize the busy work that is part and parcel of December. With that done, I could relax, knowing that practical matters were well in hand, and turn my attention to spiritual matters.

It seems simple, but it revolutionized our home. Suddenly, Advent was no longer a season to be survived on the path to Christmas morning carnage. It was its own season, full of breathless anticipation as every morning a child opened the Advent Calendar to discover what our daily activity would be. Organization allowed us to take time for service opportunities that might otherwise have slid by us because we felt overwhelmed. It turned service into something fun. And I learned that the secular fun I had always dismissed as trivial distraction actually enriched my spiritual journey. 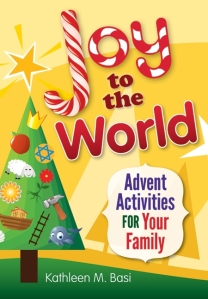 Two weeks in, I realized that Advent Reclamation was way bigger than our little family, and I started putting my thoughts on paper. The next summer, I signed a contract with Liguori Publications for Joy to the World: Advent Activities for your Family.

This year, I invite all busy families (and let’s face it—whose family isn’t?) to reclaim Advent with us. Join me here on Fridays this Advent, and let’s talk about the joys and pitfalls of trying to walk a balance between the secular and sacred in this crazy, holy, and magical time of year.