Before I begin, I need to be clear: the following post is not a complaint, and should not be taken as such. As a matter of fact, I’ve been unusually patient this week. (Maybe Lent is “taking”?) But Fridays are my chance to record the good, the bad and the ugly of our life—my “Journaling” day, so to speak—and this has been our life this week. I’ve said many times that sleeping through the night is a myth. New parents don’t want to hear that, but as evidence, I present: 7 Quick Takes…the Sleep Deprivation Edition.

Sunday: I spend the day engrossed in Abby Johnson’s book Unplanned, a memoir of her conversion from director of a Planned Parenthood clinic to prolife advocate. I admit I wasn’t sure what to expect, but it was a very interesting read, a very personal story, without far-reaching political rhetoric, and I couldn’t stop reading. Consequently, I was fifteen pages from the end when bedtime came, and I lay awake until past midnight feeling wound up about the unresolved questions. Oh yes, and then twice as I was just about to drop below the threshold of sleep, Julianna woke up wailing.

Monday: a very mild thunderstorm moves through the area, with nice growly thunder, nothing scary…but by some stroke of extreme bad luck, Alex wakes up. He then comes into our room and whimpers that he wants to get in bed with us.

Tuesday: Nicholas takes his turn, waking up three times asking the air for “wa wa wa wa.” Mommy, more than anything, is thankful that she was awakened by some semblance of speech instead of wordless crying. But waking is waking no matter how it happens. We get water, we wipe runny noses, we go back to bed. 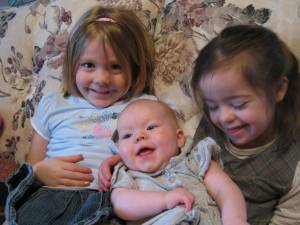 Wednesday: It’s a late night, as always after choir practice, and the kids are already tired because nap schedule got rearranged around sleeping on the bus and a visit from cousins (but aren’t they sweet?). I’m combing Julianna’s hair out and it’s a mess—she gets more food in her lovely locks than any child I’ve ever seen—and she is screaming. Not crying, not protesting—I’m talking blood-curdling screams. And when she’s done, I hear the rasp in her throat, indicating a long night ahead. Sure enough, when Nicholas wakes up (crying, not speaking) and I go in, Julianna’s breathing has taken on the “stridor” pattern that in times past guaranteed a hospital visit. But our experience at New Year’s has taught me to be a little less paranoid. Nonetheless, I decide that the wisest course of action is to get the vaporizer running. Only I can’t find it. It is in neither of the places it has been stored in the 3 ½ years we’ve been living here.

So Christian gets a wakeup call. Fortunately he knows where he put it, so I fill it up and get it running. But by now I’m wide awake at 1:30 a.m. I’m so tired that I don’t lie awake all night, but I lose more than half an hour in the middle of the night, and when the alarm goes off at 5:30, I almost can’t drag myself out of bed to go walking. (Walking, not running, because spring has skidded downward into freezing temps again.)

Thursday morning: Bonus round. Both little ones are sick; Julianna perks up enough to be sent to school, but her teachers say she’s clearly not herself, and Nicholas is like a cuddly, whiny growth on me. He must stay within six inches of Mommy, and preferably touching me. As any mom knows, this is not conducive to productivity, in particular housecleaning, and it wears the nerves as well. I figured we’d lie down on the couch together and maybe we’d both get a cat nap. Nope. He’s just an unhappy child. He’s not interested in anything I suggest till I give up and suggest a video. Then, at last, he’s hooked. I put on the trains and retreat to do some writing, and then I look up and see this: 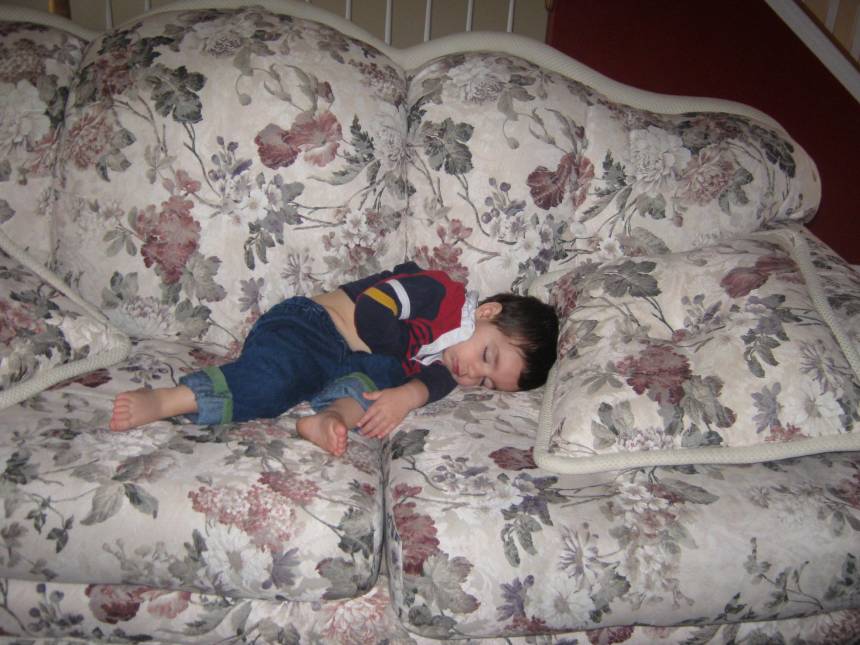 Which means, of course, that I have tag teaming nappers, and by dinnertime, a tantrum-throwing two-year-old. Oh, yes, it was a fun evening. But we finally tipped the scales, and last night every last blessed one of us slept through!

On the other hand, Thursday was also “Letter Person Day” for kindergarteners at Alex’s school. He dressed up as Mr. Z, “zipping zippers.” OK, one two three, in chorus, say “Awwwwww…..”

I leave you with a quote that applies in all the above situations as well as whatever you’re experiencing today, good or bad. “I believe that if Sunday doesn’t lead us to Monday–with an awareness of God in all creation and that our mission and purpose are to love all people–then we may need to rethink what we are singing, how we are singing, and why we are singing.” John Angotti, in Pastoral Music, March 2011 issue.