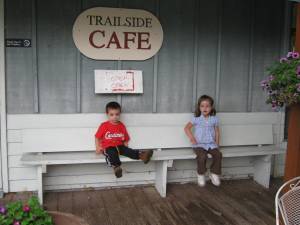 I always expected that Nicholas would leapfrog past Julianna by the age of two, and that they would switch places in the family, he taking the position of role model, she becoming the one who looks up and tries to imitate.

It turns out it’s not that simple. This isn’t going to be a deep, insightful blog post, but I thought it might paint an interesting picture of life with Down syndrome to try to show the dynamics of these two children’s development.

In many ways, my little ones are still twins. As Nicholas grows and Julianna stays tiny and pixielike, they’re starting to look the part—enough that a mom at a birthday party the other day was shocked to discover Julianna was two years older. 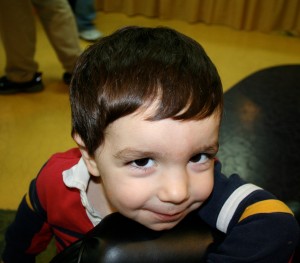 The place I really expected the difference to manifest was in speech, and I was right. At 2 ¼, Nicholas is a little parrot, repeating every sound combination he can figure out, and making hilarious guesses at all the rest. We’re constantly trying to decipher what he’s trying to say, because 75% of the time he’s trying to communicate. “Five plus two,” Alex yelled from the living room the other day, and from the level of my knees, where Nicholas was helping pull dishes out of the dishwasher, I began hearing “I…puh…too. I…puh…too.” He doesn’t bother with details like closing consonants—or midword consonants, for that matter. “Daddy” becomes “Da-ee,” doggie becomes “dah-ee,” and so on.

Meanwhile, Julianna continues to communicate by yelling, pointing, grunting and signing. She has the same three or four words she’s had for quite a while: “mmmmmmmmmAH!” (moon), “d-d-d-da!” (dog), “bBAH!” (ball), and so on. (1. Yes, they all have exclamation points at the end. Speech is hard for her, and she puts her whole body into the effort.) (2. “Mama” and “dada” are not on the list, but “Ba-ba”, grandpa/grandma, makes an occasional appearance.) I’m trying now to stop responding to her demands for drinks unless she says “wawa” or “mmmmmmmuh.” 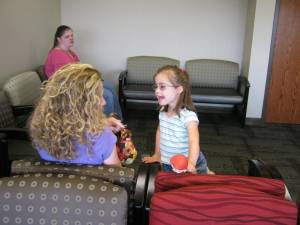 But speech delay does not mean an equivalent delay in cognition. For Julianna, the difficulty in speech is physical. Speech is largely a physical task. With “hypotonia” (low muscle tone), every physical task is harder—thus, she didn’t walk till 2½ (although the last ½ year of that delay had more to do with major illness than low muscle tone). Speech requires your tongue to do incredibly tiny, complex movements in quick succession. For one who struggles with all physical tasks, speech is bound to be delayed—but that doesn’t mean understanding lags equally.

Emotionally, Nicholas is still far behind his big sister. He follows instructions better, but it’s not because she doesn’t understand. It’s because she doesn’t want to comply…because it’s hard. I’ll hand her a pair of underwear and say, “Put on your underpants,” and she’ll hang her head and stare at my midsection, she’ll yell and point to the music box playing in the background, she’ll sign “book”—anything to avoid the task at hand. At least three times during the dressing process each morning, I have to count backward from 5. If she’s in a good mood, she hops to as soon as I start. On a bad day, I get all the way to one. But she always does the job in the end.

She understands. Oh, yes, she does. She just knows there’s something different about her, and she’s figured out how to use it to her advantage. 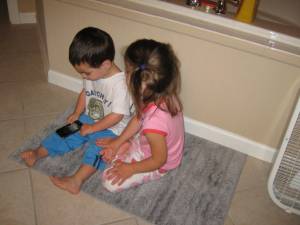 Another example: evening chores. At the table one night, Christian told Alex his new job was sweeping under the table after dinner, and that the little ones would take over his old job, clearing the table. Of the two little ones, Nicholas was the first one finished. We told him to take his plate to the dishwasher. Next thing I knew, Miss Stealth herself had slid down from her chair and was plodding across the kitchen floor carrying her own plate, without even being told.

Consider this your lesson in interaction with children with disabilities. Difficulty in speech does not an equally-slow brain make.

Julianna is toilet trained—Nicholas is about 1/3 of the way there. They both recognize about half the letters of the alphabet. Julianna can say “k” (when she really wants to, but it’s hard) while Nicholas still skips it or substitutes “t/d”.

Well, I’m getting long…time to stop. But we’re uniquely positioned to be able to visualize how incredibly complex is the nature of developmental delay, and I wanted to try to share that with all you fine people. I’m interested to hear from you: did this give you an “aha” moment? Was this something you already knew? Can you share examples from your own experience?

2 replies to Pixie vs. My Little Linebacker: Smackdown!