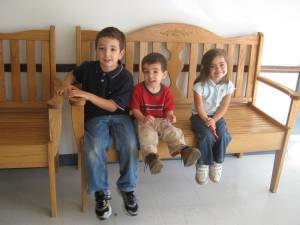 Ever since that conversation, I’ve been aware of that tension—what you have to give vs. what you receive—in the passage of hours. For a full week, we’ve had sick children in the house. Julianna had a brief bout with her old nemesis, croup. The next night Nicholas took the baton, with one night of croup followed by two nights and three days of good old-fashioned drainage coughing and high fever…which happened to coincide with Christian taking a trip for work, so I got to deal with it alone, night and day…which happened to coincide with heat days in the school district, meaning I had both the little ones home and no writing time to speak of.

And then the nosebleeds began. I would say “epic nosebleeds,” except I know that would be an exaggeration. Let’s just say worse than anything we’ve experienced in six years of parenting. (Before the comments roll in on nosebleeds, we’ve had lots of conversations via Facebook, and I exchanged emails with a friend who is an ENT, so we have a plan of action. The nosebleeds aren’t the point…the point is the drain on parental reserves.)

All in all, a rough week. The kind of week that people without kids hyperventilate when thinking about. (And sometimes after, too.) How can you possibly handle all this? How can it possibly be worth it?

But there are moments that answer that question. On Saturday, when I’d hoped to be writing, I lay instead on my bed with Nicholas cuddled against me, fretful, radiating heat, unable even to reach my book so I could at least read while I comforted him to sleep. And as I sighed, on the verge of resentment, awareness came creeping in: the feel of that soft baby fat, the gleam of long lashes in the afternoon sunlight, the peacefulness of breaths lengthening, deepening. The feel of a moment, the knowledge of being that important to someone. Just enjoy it, something inside me whispered. And I did. (And then I brainstormed a novel scene.)

These moments sneak up on you. You can encourage awareness of them, but you can’t orchestrate them. Like that picture at the start of this post. We were visiting my grandmother on Labor Day and had to come down to the lobby to open the door for my uncle and aunt (who brought the cane that started it all). That’s all. The kids found a bench and decided it looked like fun. Who knew? 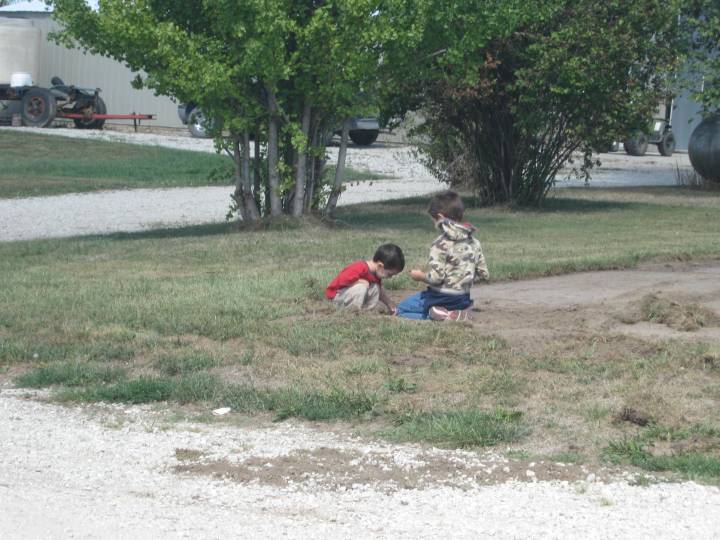 My heart squeezes, just remembering the beauty of it: the crystalline sky, the brisk, cool breeze, the vividness of the colors and the distance from which I watched as I stood helplessly trying to think of some way to help my dad fix the combine…all these things converging as I glanced up to make sure my boys were all right, and found my breath catching in my throat.

It’s like trying to convince people that the Scary Bad medical stuff about Down’s isn’t the whole story. You have an objective, measurable list on one side of the scales, and on the other, a highly subjective, experiential weight that is impossible to quantify. The truth is, parenthood is something you just have to experience. To take the knocks with the moments of bliss, the resentment with the joy. It’s not like a job or a hobby you pick up and lay down; the very all-consuming nature of it makes it a part of you…changes you. It becomes who you are, not something you do.

And that changes everything.

10 thoughts on “What Makes It All Worthwhile”