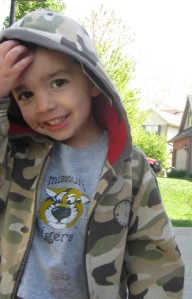 Nicholas rode in the tractor with his grandpa for a couple of hours last Friday. When the big red Case, with planter behind, swept in for lunch under the shade of a row of trees, Dad signed to me that my son had fallen asleep. But by the time the door opened, Nicholas was chattering busily.

Dad chuckled. “That boy,” he said, “talked nonstop the entire time he was in the tractor, up until he fell asleep.”

I nodded. “That’s my life every day. It’s exhausting! Mentally exhausting, I mean.”

He nodded thoughtfully in turn. “Yes, it is. You could just let him talk…but the problem is, he expects a response!”

To get an idea of what Nicholas is like, the best illustration I can think of is that 1990s Mel Gibson movie Conspiracy Theory. “Jerry” is a cab driver in New York who talks nonstop all day, even as his voice grows more and more hoarse, until by the end of the day he can barely talk at all.

Nicholas talks even when he has a sore throat. He talks whether or not he has anything to say. If he runs out of words, he simply hums or says nonsense syllables. And he virtually always expects a response.

I reiterate something from yesterday’s post: the word “noise” comes from the word “nausea.” This is what noise does to me. It unsettles me, sets me on edge, which is why I seek out stillness, and why I hardly ever play music around the house even though I have two higher degrees in music. So you can imagine the soul-growth my third child requires of me. Some time I should count how many times a day I say some variation of “Be quiet!” to him. Frequently I have to remind myself he’s not actually doing anything wrong.

He’s singleminded as only a three-year-old can be. For example:

Me: “Finish your lunch.”

Me: “Finish your lunch first.”

Me: “Finish your broccoli right now, and then we’ll talk about it.”

Julianna doesn’t talk much. Remind me why we’re pushing so hard for her to speak? …

5 replies to My chatterbox