As of Thursday morning, the scales read 141-point-(something, I was too stunned to remember). I have now grazed a weight I haven’t seen since pre-pregnancy with Julianna, six years ago. (Fist pump.) 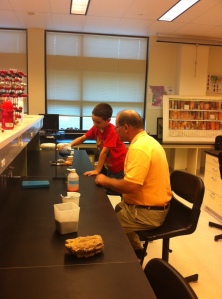 Alex spent an hour and a half yesterday morning in the lab of a soil scientist at the university, doing “experiments” and learning about electrical charges of clay. For a long time, he’s shown an interest in science and how things work–encouraged by his daddy, who often wishes he’d pursued science himself. Late last school year, Alex and a friend started “studying” the dirt on the playground. Christian cooked up this very special field trip as a result.

Nicholas and I have been having fun lately. Mostly–we still have moments where we butt heads, but I think I’ve finally found the perspective I needed to turn things around. Last weekend he was wowing grandparents and cousins with his vocabulary: he went tearing down the lawn to the low fence at the edge of the lake where his grandparents live, and stood staring out at the scene, then came running back to say, “Gamma, the lake is beautiful.” She kept marveling over it all weekend, and it made me look at him in a different light.

I can’t believe it’s time to buy school supplies. Julianna has an eval this week–something new they’re trying at the public schools. The whole process of starting kindergarten is so different this time, it’s like doing it for the first time. And even more because we still don’t know what’s going on in that little brain most of the time. Maybe we need to take her at her word: according to her signs and rudimentary words, she wants a) Signing Times videos, b) carousel rides, c) the pool (but she won’t get in when we go; she just wants to sit on the steps). She’s driving us nuts with the carousel: “kee-yoh,” she calls it.

Speaking of Julianna, here’s the newest development in her speech: she says everything three times: “Ba-ee ba-ee ba-ee!” (Mommy.) “Ba-koh ba-koh ba-koh!” (Michael.) “A-ah a-ah a-ah!” (Alex.) “Da-ee da-ee da-ee!” (Daddy.) But her own name? “Ooo-eee-aaaaaaaaa! Yaaaaaayyyyyy!” She never fails to congratulate herself. 🙂 Notice also the exclamation points at the end of every word. She’s so thrilled to be talking at last, even if we can’t understand her half the time. 🙂

Meanwhile, Michael has started popping teeth like nobody’s business–four in two weeks. He’s continued his freakishly fast gross motor development and is now pulling into standing and trying very hard to figure out how to cruise. (He’s 8 months old.) At choir practice on Wednesday, he actually let go of my leg for one second.

Finally, please pray for a break in the weather. My parents are farmers and they think they might have enough of a corn crop to fulfill their obligations to the ethanol plant they are invested in, but as of last week there were zero pods on the soybean plants. The beans are close to the end of their blooming phase, and they simply can’t set fruit when it’s breaking a hundred degrees every day with no rain. This is scary stuff, and it’s not us who are going to feel the worst effects of it, but the poor.

4 thoughts on “7 Quick Takes: An Update on Kids and Weather”