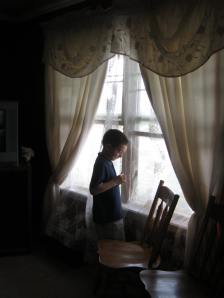 It’s seven-thirty on Saturday morning, and Alex is already in trouble. He got Michael out of the crib while Daddy and I were downstairs and then wandered away, leaving his nine-month-old brother on the bed. It doesn’t take much imagination to spin out the picture: The thunk, followed by baby wails, brings me running upstairs. Alex gets told in no uncertain terms what I think of his thoughtlessness, and he retreats to his room to sulk.

Once I’m confident that Michael isn’t hurt, which takes a while because he won’t stop crying for several minutes, I go into Alex’s room and sit on the bed. He feels terrible. The associate pastor once told them in a homily that when they know they’ve done something wrong, they can punish themselves– an idea not wholly without merit, but no child should be applying such a lesson without guidance, especially Alex. I longed to smack the priest when I finally realized what was going on, after months of Alex “punishing” himself for things that didn’t deserve punishment.

“Come here,” I say, and Alex unfolds long, lean limbs and tries to crawl on my lap–an operation that ends up involving some accidental fisticuffs and a fair amount of laughter from both of us. “You’re too big for this,” I say.

“But I thought you wanted me to get on your lap!”

“I do,” I say. Eventually, we manage the tricky operation. It doesn’t take too many words. Alex knows he was careless and thoughtless, and Michael could have gotten hurt; he needs comfort, not scolding. Comfort comes from me, and from Michael himself, who can’t bear to be six inches away from Mommy at any time. He crawls over to the bed, pulls up grinning Cheshire-like, and says, “Sssthhhhssthhh!” Clearly, he’s not holding a grudge.

Michael starts smacking Alex’s leg. A tiny smile plays on Alex’s lips. He reaches out, and Michael wraps his fist around his big brother’s finger.

And in that moment when I see the tenderness on Alex’s face, it’s like I’m flashing forward in time. For just a moment, I see Alex with his own baby. I see the gift for love–fierce, yet so sensitive–that makes me as certain as I can be of his future vocation.

The next moment, the veil drops, and Alex is a Star Wars, superhero-obsessed seven-year-old. Who happens to have the most amazing heart I have ever met. And I will never be quite the same.

13 replies to A Glimpse Beyond the Veil