I saw something this week I still can hardly believe happened. There are a number of homeless men begging at various intersections around the mall right now, and on the way home from picking Alex up from piano lessons, I gave a dollar to one of them. We were a good distance back from the light, and the man had to walk to get to us. He said the standard “God bless you, ma’am,” and headed back to his spot. As Alex and I started talking about the whole what-is-the-appropriate-response-to-the-homeless issue, I noticed the woman in the car in front of us giving me a hateful look in her rearview mirror. Weird, I thought, but whatever. Then the light changed, and as she pulled forward past the homeless man, I saw a peach pit fly out of her window and smack into the curb below him, spattering juice and nastiness.

Around the corner and up a long block, at the other end of the mall stood another man begging. The light was green, and as she sailed past him, I didn’t see her action, only him turning to shout after her with a raised fist. Maybe she flipped him off, I don’t know. I just couldn’t believe anyone would react that way. It was unsettling, especially after the reflections on poverty I’d shared that very morning.

After that kind of a start, it feels abrupt to transition to anything else. So I’ll just do it, I guess. We’ve entered formal discussions with the Catholic school about Julianna–had a meeting with the principal yesterday to begin discerning whether it’s possible to move her over from the public school next year. I love Julianna’s school and teachers and staff, but this business of multiple calendars, parent organizations, fundraisers and so on is brutal. It spreads me too thin. I’m basically an uninvolved parent at both schools. We have to figure out many things: 1–can a teacher and classmates substitute for a para, because she won’t have one at Catholic school. 2–what kind of therapy services will the public schools will still provide her if she’s not on site, and is it enough? 3–what sort of schedule will it follow, and will that be just as brutal on me, since I’ll be responsible for transporting her?

Anyway, one of the things the speech  therapist has been working on with her is final consonants. The other day she called, “Bah-ee, moh-ka!” I turned, puzzled, because that wasn’t something I’d heard out of her before. Mommy, mocha? She doesn’t even know what mocha is, does she? She was holding her glass up. Oh, milk!

Speaking of speech-related development, Michael is a stubborn cuss. He won’t sign. Stinker.

Alex has been driving us crazy. In the past few weeks, he’s forgotten to take his homework to school, forgotten to bring his homework home, lost a library book, lost a COAT…and it routinely takes him half an hour to get from his room into the shower, and forty-five minutes (no, Dad, I am NOT exaggerating) to sweep the floor under the table after dinner. He’s off in some la-la land of imagination all the time, which is incredibly endearing, except when it increases my workload. The library book was simply the last straw. I took away his entertainment privileges for two weeks and told him he’s going to be doing a LOT of chores to pay for the book. Because you see, he had to go pull money from the bank to pay for the coat, and we can’t keep raiding his savings forever.

Weight loss has stopped being easy. I seem to have hit my first plateau. I’ve been under calorie budget for four days, sometimes significantly so, and yet the weight is stubbornly not changing. I dropped a nursing and took away some of the calories I’d added in, but it hasn’t helped. Neither did going to Jazzercise two days in a row. I’m not sure how to proceed.

A few weeks ago, I stumbled across this book, which I acquired secondhand sometime in my childhood, and gave it to Alex, who wrinkled his nose and eyed it suspiciously. But I told him I’d loved the stories when I was a kid, and asked him to read a few pages and give it a try. Honestly, I thought he wouldn’t bite, but he humored me and then began gobbling up stories. These stories are set in a clearly pre-V2 time frame, but when I was a kid, the difference in their clothing and what the priests and sisters wore didn’t even register. I mean, I noticed, but it didn’t occur to me that there was anything particularly weird about it. Kids accept so much more than adults, who try to make an issue of EV.ER.Y.THING. 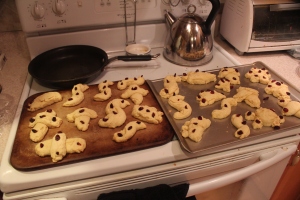