Alex is a great kid, but he can’t find diddly squat. Wednesday night, as we were getting ready for choir practice, was no exception. He couldn’t find Julianna’s backpack, even though he was standing right beside it. A couple minutes later Nicholas shouted (because what other volume is there?), “MOMMY I CAN’T FIND MY HEAVY COAT SO YOU HAVE TO FIND IT FOY ME!” Alex went to the closet and said, “It’s right here, Nicholas!”

I murmured to Christian, “Alex found something?”

Speaking of the Pope, what’s your impression so far? He seems like a simple, humble man, a servant rather than a king, and I couldn’t be happier. I loved that he asked the faithful to pray for him. I loved that touch of self-deprecating humor: “They had to go practically around the world to find him.” And the way he referred to himself as Bishop of Rome instead of Pope. And those big, out-of-style glasses. And the fact that he’s already been criticized by both right and left, which is always a good sign. I can’t wait to see where he leads us.

Nicholas has a little angel-devil thing going on. He’ll be super sweet and helpful for a few minutes and then grow fangs and start smoking at the ears, resulting in banishment to his room, accompanied by ear-piercing screams. So the other night, when Nicholas gave us a whole dinner hour’s worth of politeness–please, thank you, compliments, the works–Christian said to me sotto voce, “Who turned the angel light on him?”

Yesterday afternoon I broke the Burley out of its snowstorm storage. The kids are crazy about the Burley. For now, at least, when they’re riding behind a bicycle they seem to be immune to the snipping and bickering that has come to characterize so much of their interactions recently.

I hit the big time this week: I was featured in an article in the National Catholic Register!

And because you need some Julianna cuteness, here’s a video from choir practice. (Disclaimer: this was our first run-through of this particular piece. It is not a polished performance.)

Julianna goes to religious ed on Wednesdays now, so she’s with us for the last half hour of rehearsal instead of in the nursery with the rest of the kids. She thinks she’s part of the choir–pulls out a book, sings at the top of her lungs whether or not she knows the song. It’s adorable.

And finally…I’ve been at 129-point-something for 5 days, so I’m going to call it: I’ve reached my weight goal! 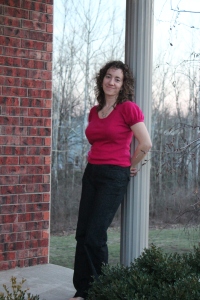 I went running last weekend for the first time in months and was thrilled to find it enjoyable. Lots and lots of Jazzercise has given me the strength and endurance I needed to make it a positive experience instead of a penance. On Sunday afternoon, though, my legs were really tired. I realized I hadn’t taken a day off exercise in two weeks. I knew I needed to cool it…but I can only get to Jazzercise on certain days at certain times, and videos are a mediocre substitute. So I pushed through Monday, and man, I was sore. On Tuesday I expected a more leisurely workout, but we did “circuit training,” which turned out to be even harder. I winced my way through the rest of the day, my muscles telling me “Enough! Mercy! A break!” So unwillingly (because exercise gives me more calories to eat) I took Wednesday off…and the soreness dissipated instantly.

The odd thing is that I’ve been STARVING all the time again, despite being over my calorie budget every day for a week. And yet my weight is maintaining. So that tells me the excessive exercise had kicked up my metabolism. And also that I’m probably ready for a maintenance diet instead of a losing one.

We got Alex up early this morning to watch the space station cross overhead. I’ve seen it several times while running, but it was fun to share with Alex.