Michael weaned this week. Or, I weaned him. Holy Saturday he was sixteen months, and nursing was beginning to feel like a chore. But I knew there was no going back, so I kept putting off making the decision. But Mondays I go to Jazzercise at 5:45, and Christian always has Michael dressed and eating breakfast when I get home at 7. So when Tuesday morning rolled around and I came home from voting at 6:50 a.m. to find Michael happily running around the upstairs, wanting nothing more than a cuddle, I realized the time had come. As one of my critique partners said, I am a nursing mother emeritus. I’m one part sad, one part relieved. The story of parenthood.

Yesterday was an up-and-down day. Down: At 3:10 a.m., Nicholas came in wanting to snuggle, and by the time I got him back in bed I was wide awake, itching to work on my novel, knowing if I got up I’d regret it all day. Up: First thing in the morning Michael had his second-ever toileting success. Followed by another after the morning nap. Sleep deprivation notwithstanding, I was feeling pretty happy with life until: Nicholas took a spectacular dive off the barstool. He didn’t even put a hand out. He hit the laminate hard, directly on his head, and he would not calm down. And his eyes were opening and closing and rolling slowly–enough that this mama of four, who’s had her share of child head bumps, was concerned enough to call the doctor. (These things always happen at bedtime, you know, so it’s hard to tell how much of it is tiredness and how much is injury!) So we ended up having an unexpected nap time/writing time doctor visit. (He’s fine, by the way. I figured he was, but better safe than sorry.)

Tuesday Alex did Chinese lettering in art class. They had two closely-related phrases to choose from: “May grace and peace follow you wherever you are,” or “May grace and peace be with you in all seasons.” Alex chose the first. His reasoning? “Because what if you’re in another dimension where there are no seasons?” 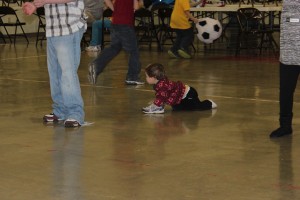 Holy Saturday, Alex lost his shoe. At first, we blamed Michael, since he’s been thieving shoes from family members and visitors alike and walking them all over the house, either on his own feet or on his hands, depending on the mood. But we tore the house apart for two days, and that shoe was nowhere. Finally Christian said, “Please tell me you looked in the recycling box before we got rid of it on Saturday.”

“Oh, no!” I said. “Of course I didn’t. We didn’t even know the shoe was missing yet then!” That big, open box, with lots of other boxes inside, was sitting right in front of the shoe cubby. So I’m sure the recycling workers got a nice new blue tennis shoe out of their work that day. Not that it will do them much good.

Well, that was the last straw. Easter weekend Christian cleaned out the cubby/mud room. Thursday I did the pantry and the medicine cabinet. And we have a list of cleaning/organization projects for this weekend. I don’t have a great deal of hope–after all, we have six people in our house, and the smallest one is hell-bent on destroying everything within reach–but I’ve got to try!

(If anyone EVER NEEDS AN IDEA FOR A GIFT FOR US, hire one of those “here’s how you organize your house for maximum efficiency” services!)

Speaking of Michael. Wednesday night the woman watching the kids during choir practice greeted me with a shake of the head when I came to pick up the kids. “All he wanted all night was to climb on that table,” she said. (A coffee table.) “And then he wanted to stand up!”

“Yup,” I said, because I’d pulled him off the train table six times during my lessons that afternoon.

“I don’t know how you keep up with him,” she said.

You know good things can come out of the worst situations, and this week I realized how grateful I am that I struggled so long with carpal tunnel & tendinitis in college–because that’s how I connected with my massage therapist. He teaches me how to take care of myself. I have long harbored a niggling fear that the ongoing issues my parents dealt with in my childhood are waiting to crop up in mine. One of them–chronic headaches–did, but I now know maintenance stretches to prevent them. We had a conversation about another one this week, and I learned that what I always thought was a solely medical problem very likely has a preventable musculo-skeletal cause, one I can easily prevent. It was a blessed day when my flute friend sent me his way. I’ve always known it, but as I get older the knowledge takes on new significance.

Okay: bathrooms, you will be spotless by lunchtime. You are warned.

5 replies to 7QT: The Disorganization Edition