Last week was not a good week–the first week of summer vacation is always a transition time, but this was ridiculous–but I thought after the weekend away, my attitude was bound to be so improved that life would be markedly better. And it was, at first. Although I’ve been growing steadily more exhausted by virtue of an inexplicable inability to sleep at night. Being tired makes everything so much harder.

Wednesday evening was the opening ceremony of Alex’s cub scout day camp. He was super-excited at the prospect of building space shuttle models, shooting BB guns and archery. Until, midway through the talk given by an astronaut, he began cupping his hand over his ear and looking more and more mopey.

Considering he was supposed to spend the entire next two days running around doing boy things, I called home and said, “Do you think I should take him to Urgent Care, just to make sure?”

We arrived at the hospital at 7:45 p.m. and were told that there were four people ahead of us, so brace ourselves for a wait. We watched an entire program on Animal Planet about treehouses. Alex did an art project and two mazes. I worked on my column and a bit on a novel scene (thank God I had my NEO along). And finally, at 8:50 p.m., the doctor arrived. She spent 15 minutes confirming an ear infection and giving instructions I didn’t have the heart to tell her I knew backwards and forwards after Michael’s nonsense this year; then all we had to do was wait for the release instructions, including the amoxicillin prescription. And yet we didn’t leave the hospital grounds until 9:45p.m. By then the only place open was Walgreen’s, which doesn’t accept our insurance. But amoxicillin’s cheap, right?

Another 45 minutes and $45 later, we had 3 bottles of amoxicillin in hand. We got home and medicated him at last, getting to bed just before 11p.m.

You might imagine I was completely exhausted all day yesterday. I actually slept in until 6:30, when I had to get up in order to get everyone else going. I was crabby all day, but the grace of perspective gained by weekend away allowed me NOT to take it out on the kids. “Nicholas, please stop talking,” I said. “I’m very cranky, and I don’t want to yell at you, because you’re not doing anything wrong, so please just be quiet for a minute, okay?”

As an aside, that boy seriously does not EVER stop talking. Remember that opening scene from the movie Conspiracy Theory? That’s him. Except he doesn’t lose his voice from it. I can only assume that’s because his vocal cords are younger.

Okay, back to the topic at hand. What’s the best thing to do on a day when you’re cranky and exhausted? Go grocery shopping with two kids, of course! We got through Aldi relatively unscathed, until, for the eighth week in a row, the checker stacked things on top of my lettuce and spinach bags. Now, I’ve been peeved about this for weeks. I’m like, Hello! You young whippersnapper of a college student, don’t you buy lettuce? Ever? It irritates me so much, I try not to say anything because I’m afraid I can’t be polite. But this week, my filters were off. “Please  don’t put things on top of the lettuce bags!” I said. “It squashes the lettuce!”

This college guy looks at me, startled. “I’m sorry. I thought it was already flat.”

“Haven’t you ever bought lettuce? When it gets squashed it gets bruised, and then it goes bad!”

His eyes got wide. “I’m sorry,” he said. “I promise, I’ll never do it again. Scout’s honor.” His mouth was twitching.

I had to laugh, but I felt a need to explain as I ran my card. “I’m sorry, it’s just been happening a lot here lately, and I don’t understand why people do it.”

Nicholas had been smacking my leg repeatedly and calling, “Mommy Mommy Mommy Mommy!” At last I looked down in time to hear him say, “But I wanted to push the buttons!”

“Oh, I’m sorry, honey,” I said. “I was too busy yelling at the cashier to think about it.”

Well, on the up side: I got an email accepting my Gospel(ish) arrangement of How Great Thou Art for publication, and another asking me to continue my column in Liguorian for a third year. So that’s worthy of a happy dance. 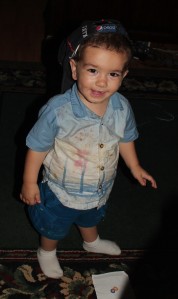 At the end of the day we went out to Alex’s baseball game. I watched Michael toddling around, throwing gravel and drinking water, and was awed at the way I could see into the future in the way he looked. It was like seeing middle school superimposed on babyhood. Man, that boy is cute. Julianna made a sensation by wandering into the opposing team’s dugout and then OUT ONTO THE FIELD IN THE MIDDLE OF PLAY.  Alex himself fell apart because, well, in reality because he was really overtired and had an ear infection, but ostensibly because he didn’t make it to base in five at bats, even though he hit the ball three times. Poor kid. He sat on the bench crying tears down a dirt-streaked face, and didn’t want to go out and smack hands with all the other players. “You get up right now,” I said. “No child of mine is going to be a poor sport!”