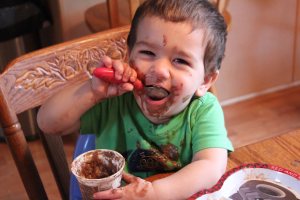 I am beginning to accept an incontrovertible truth: if there is a mess to be made, Michael will make it. Wednesday morning, he turned over a cooler half full of water and ice, which we’d been too busy to empty after taking snacks to baseball Tuesday night (that was the end of a marathon day: 3 doctor appointments, a piano lesson, and baseball). It took two bath towels and a beach towel, all dripping, to clean it up. Then Thursday he found a bottle of bubbles and dumped it on the floor. I’m growing to dread the slosh of liquid.

My cousins are planning a get-together. There’s a zip line on site, but it has a 120-pound weight limit. I emailed: “Hey, is that the right number? I’m pretty sure none of us are under 120 pounds, even me, and I’ve lost weight. 🙂 ”

Another cousin wrote back, “I was thinking the same thing…but without the smiley face.”

Who’s in charge in your marriage? That’s a trick question, btw. I ask because we often come away from a family get-together with the uncomfortable sensation that each family thinks the in-law is the controlling force in the house. We think that probably means we have a pretty healthy relationship.

But I got to thinking: we defer to each other in situations and on topics that many couples don’t. Like the other night, we hadn’t had a chance to talk through the evening before I dropped Alex off at baseball, so I called Christian on his cell phone at 6:30 p.m. He was coaching at first base and answered his phone, and apparently got ribbed a bit for it. Last week we heard a “comedy” routine about women who give their husbands allowances. (It wasn’t funny at all; it was a bit nauseating, truth be told.) Then I think of women I’ve recently heard describe male behavior that would be unthinkable in our house. And then I think it’s a wonder that every marriage doesn’t implode, if that’s how women and men treat each other.

Well, anyway. As I said, Tuesday was a marathon. Michael saw the ENT, who scheduled him for tubes. Despite the persistent ear infections, Michael passed his hearing screening with flying colors. But the ENT was unhappy with the fact that he has no words. “He’s eighteen months old and he’s at a twelve month speech level,” he said. “You need to enroll him in speech therapy.”

This kind of edict doesn’t sit well with me. I’m really not one of those moms who flips out when her kids don’t do everything exactly on time. I mean, I’ve had Julianna. I know a real delay when I see one…don’t I?

I sat in that office with three children fighting over a the same chair and the fourth one trying to flip the switches on the $15,000 piece of equipment and thought, first: Whoa, I think it’s time to reconsider the “taking all the kids along to the doctor’s office” policy. Next, I had a little argument with myself about putting Michael in speech therapy at eighteen months old.

Pro: He is getting to the tantrum stage.

Con: But then, we haven’t taken the time to really make him sign.

Pro: It’d be lovely to get him talking a bit!

Con: all our kids have been late talkers, and now they won’t shut up. I really don’t think there’s anything wrong with him. He just hasn’t had the one-on-one interaction the way some of the others have.

Pro: this would give him that one-on-one.

Con: the reason he doesn’t get that one on one is because life is already a zoo; how could we possibly add more?

Pro: I’d like him to talk ASAP.
Con: speech therapy really didn’t help Julianna much until she got into preschool; I can’t help thinking even she talked when she was ready, and all the therapy in the world can’t force the issue.

Addendum: we’ve spent this week making Michael sign, and it’s amazing how much he already knows.

7 replies to Messes, Marriage and Speech Therapy (a 7QT post)