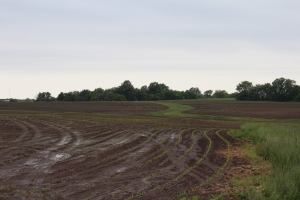 It’s Friday afternoon and out in the country, the air smells sweet and cool. The sun has been disappearing, hour by hour, into haze and then cloud and, at length, a fully overcast sky. It’s Field Trip day. I’m parked along a gravel road with the windows open and a baby asleep on my shoulder while the boys ride with Grandpa as he finishes planting soybeans.

It’s been a good day. Low key for a field trip. Unstructured. We spent the morning running around the home place. The boys climbed on farm equipment; I explained how the seed drill works. An empty grain bin provided both a cool place to explore and an opportunity to learn something new: What exactly are all these augers and blowers and stirrers, and why are they necessary? On top of the combine Alex discovered a stowaway tree branch that snagged on the unloading auger on the way through a tight spot sometime last fall. Today, it became a gun, a sword and a baton by turns as we headed up the old cattle lot.

Nicholas, newly independent on the farm, tried to take the cattle guard at full speed and fell through. As an adult it’s easy to get across unscathed, and yet I remember how big a deal it was as a child, trying to get across those iron tubes without slipping between them up to my thigh. Nicholas was a-tremble and whimpery in the wake of his ordeal, but he recovered in time to play “drive” in the big water truck. Michael was so excited. A steering wheel! And a vinyl bench, covered with dust!

Meanwhile, the big boys found a scattering of gravel on the surface of a trailer. Nicholas started throwing rocks back out to the driveway, and Alex got a brain wave: he had Nicholas pitch rocks to him while he tried to use the stick as a baseball bat. I stood on the running board of the ancient water truck, laughing at how very “boy” my boys are, until it occurred to me that this was an inappropriate reaction, and I needed to stop the game before someone got hurt.

Then Grandma took us all for a ride around the “block” in the water truck, and as far as my boys were concerned it was a successful field trip as of that moment. We ate lunch, cut some lettuce to bring back home, and headed out to the field, beside which I sit now, enjoying an unexpected moment of calm. It’s not quiet, exactly, not with two tractors running in side-by-side fields. But there are no voices clamoring as they vie for attention. No top-of-the-lungs singing. Nothing being destroyed, rearranged or lost beneath my very nose. The only child with me is sleeping peacefully on my shoulder.

And it’s so restful. I’m thinking about taking a nap myself. I brought work with me: a column and the next scene from my novel, both loaded onto the NEO in the back seat. But right now it feels right to leave this block of time empty. There’s so little empty time these days. The last couple of weeks, my mind turns bedtime into a race through a maze of things left half-finished–and when you have four kids in the house, life is perpetually unfinished. The floor gets mopped, and an hour later there’s yogurt smeared on it again. The bathrooms get cleaned, and somebody flings toothpaste on the mirror by bedtime. Books awaiting repair after they got taken into the bathtub. Mountains of health paperwork to file. And a novel to rework. The work is never done, and I toss and turn for an hour at least every night juggling it all, trying to be prepped for maximum efficiency.

At one time, I had honed the art of stillness. But in the past three years, my weekly visits to nature have gradually tapered off; I go next to never now. The child care never works out, or some deadline pops up, or a shopping trip has to get done that simply cannot be done with children in tow (read that “new shoes, having been put off for over a year and my feet now hurt”), and contemplative time gets preempted. And now the skill seems gone. I cannot quiet my mind. Not for long, anyway. Three or four seconds.

I’ve been learning to accept that in this season of life, that’s just the way it is. I’ve been pursuing the serenity to accept that what I think I need is not possible right now, and figure out how to function without it.

But sitting here now, my brain warring between the need for rest and the compulsion to be productive, I wonder if this is one of those things you’re supposed to change because you can, not one you accept gracefully because there’s no other choice.

The tractor sweeps toward me. It’s 2:15 and time to get back home in time to catch Julianna when the bus drops her off after summer school. My interlude lasted fifteen minutes, but it was enough to wake me up to what I have lost, and what I must, once again, try to find.

2 replies to At The Edge Of The Field