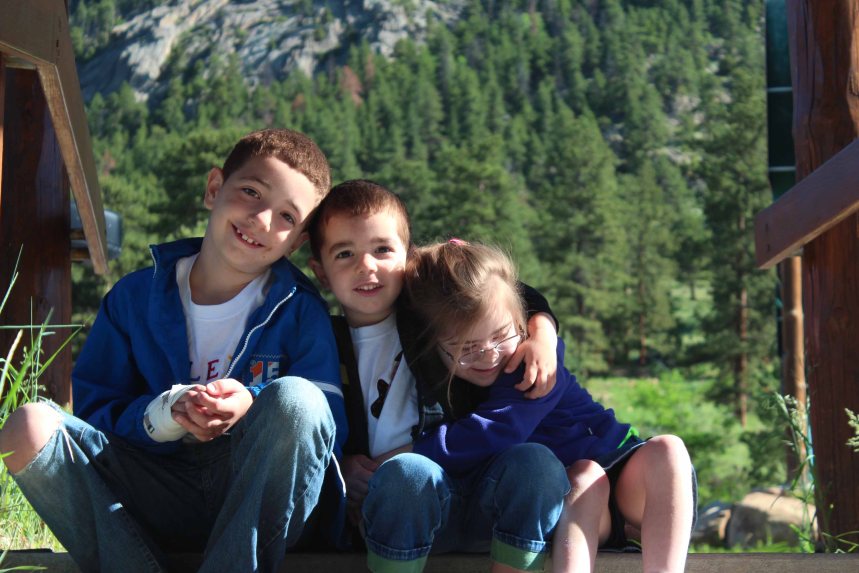 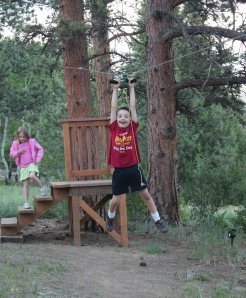 After Alex falls off the zipline and sprains (jams?) his wrist, and after a “.6”-mile trail to Alberta Falls (so notated because, for reasons I can’t fathom, they don’t count the .3 miles from the trailhead to the official start of the trail in the distance) spent dragging a 6-year-old child by the arm as she whines the entire way up and down, I’m ready for some down time. We didn’t expect that “easy” trail to take more than an hour round trip, so we didn’t pack lunch. Eating lunch two hours late always makes me cranky, and hoo-boy, does Michael need a nap. So I stay behind in the cabin and send the rest of the family up to the lodge, currently devoid of cousins. When Michael falls asleep I take myself to a rocky outcropping above the cabin, where aspen and ponderosa pine quake and sigh beneath a gorgeous blue sky studded with puffy clouds. Whenever vehicles go by on the highway, it’s really noisy, but in the gaps between? Absolute silence. Almost uncanny silence. There aren’t even any insects. 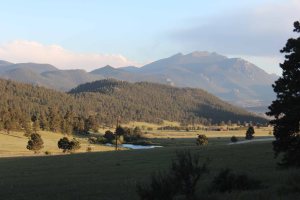 There seem to be a ridiculous number of Harleys coming up the “low-gear” hill beyond the ranch this afternoon. Finally I realize they’re trying to get someone to take a picture of them driving down the hill toward the mountain vista that gives Overlook Ranch its name. So they keep going up…and down…and up…and down….

After an hour or so, Christian calls; the cousins are returning from their rambles and assembling for the evening up at the lodge. I wake Michael, and we head up the hill. 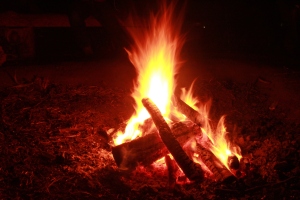 In the course of the evening, Rusty and Allen build a blaze in the fire pit. Paije and Cassie go to town for s’mores, and after the kids go to bed, the adults enjoy the rapidly-cooling evening around the campfire. I’m kind of surprised we’re allowed, as dry as it is, but Cassie says the owners told her the fire ban doesn’t start until Tuesday. A joke goes around the family: imagine if we accidentally started a wildfire, and for the rest of our family history everybody would say, “Remember that time Rusty burned down Rocky Mountain National Park?”

Fortunately it doesn’t come to that, either Sunday or Monday, when Rusty puts a piece of copper wire he found on his morning rambles in the wild country above the lodge into the fire, and it turns blue and green and purple. 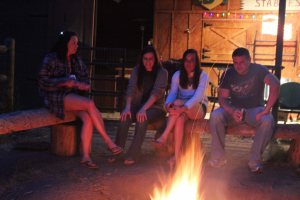 However, there is adventure: Sunday night Allen plays the mother of all practical jokes after Christian and I go to bed. He buys a “bear growl” app, climbs on the roof of the stable, and hits “play.” It scares everyone half out of their mind. (Have to say I’m glad I missed that one. 😉 ) 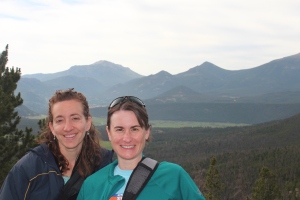 Monday we caravan with my bestest cousin along Trail Ridge Road as far as Medicine Bow Curve. It’s very, very cold, and the wind is brutal. We go out on the Alpine Tundra walk, and once again, the little kids are whining the whole time–until the ranger decides to have everyone sit down on the lee side of a tundra tree, also known as krummholz, where it’s twenty degrees warmer. Afterward, we go back up to the Alpine visitor center for lunch, after which Julianna promptly throws up. Since Nicholas also feels pretty bad, we assume it’s altitude sickness. Everyone goes to sleep, so Christian parks at Rock Cut on the way down and offers Alex and I the chance to climb that trail on our own. Walking back down, we are going into one heck of a wind.

Put vinegar, 1/2 c. honey, 1 T. oil, 2 tsp salt, and 3/4 tsp. pepper in a 3-qt. saucepan. Simmer over medium heat, stirring occasionally until reduced to 2/3 c., 13-15 min. Brush/toss with peaches and sweet potatoes. Paije, Cassie and Terri also used this to glaze the chicken we had for dinner.

Meanwhile, toss pecans in a small bowl with remaining 1 T. honey and 1 T. oil, cumin, pumpkin pie spice, 1/2 tsp. salt, and a pinch of pepper. Put a large piece of foil on the other side of the grill & scatter nuts on the foil. Grill until nuts are bubbling, 3-5 min. Toss with peaches & potatoes and serve.