The last few days of Advent have been big activities, beginning with getting the tree on Saturday and progressing through a choir party, a tribute concert to the Trans Siberian Orchestra (think head banging with laser show…the kids were mesmerized) and, on Monday of this week, ringing the Salvation Army bell. 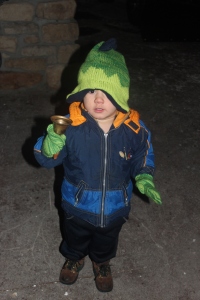 Ringing the bell has been on my list of service activities for a long time, but this is the first year I thought we were ready to do it. As I scheduled it I crossed my fingers for good weather. I didn’t win that one. It was below 20 degrees outside that night. But we put the kids in their snow pants, and I had invested in forty-five dollars’ worth of hats and gloves the week before in preparation for the cold snap. And we sang Christmas carols while we rang.

Plus, we were at Bass Pro, and Santa has a workshop there, so we took turns outside and the kids spent some time enjoying the freebies inside.

I’m proud of my kids this year. Nicholas needs a post of his own, but for now I’ll just share this: Monday night during his turn outside, Christian said Nicholas sang carols any time someone was walking up or leaving. “As long as he was singing people were putting money in the pot,” Christian said. “When it was just me by myself, they walked on by, but when he was there, they gave. That kid’s a born salesman.”

He’s not the only one to make me proud. On Sunday, Christian came up short of cash while trying to pay someone back for popcorn. Why? Because the day before, Alex made him give money to a homeless man standing at the highway intersection.

It makes me feel like we’re doing something right.