My baby came over to me last night while I was on the phone with my mother, wearing one Rainbow Brite leg warmer on his arm and a Power Rangers mask on his face while he tried to feed himself blueberry yogurt. Unfortunately, the mask doesn’t have a mouth hole. I couldn’t see his face, of course, but his body language stilled as he tried to figure out this conundrum, and I wished with all my heart I had a camera handy. In its absence, I had to make do with an internal chuckle.

Since he decided to (mostly) toilet train, I’ve had so much more attention to spare to notice the other things about him. Consequently my life is a series of heart-catching moments, interspersed liberally (and about equally) with laughter and exasperated attempts to moderate disputes among two children who can reason, one who sort of can reason, and one who is not yet aware that he is not the rotation point of all creation.

And Julianna just insists on tackling him. She loves him so much, and she wants to mother him: put his coat on, wipe his nose, the whole works. She just wants him to be a baby, and he will have none of it. He is a big boy. He roars protest when I try to help him get his legs in the proper holes of his underwear. He insists on putting on his own pants. When I had the audacity to pull a shirt over his head yesterday, the protest eventually forced me to take it back off so that he could do the whole thing himself. He even insisted on putting on his own socks. (Upside down.)

And yet if he falls down, I have to boo boo kiss both his palms. He won’t stray very far from me; periodically he wants to climb up on my lap for a snuggle (half this post was written that way).

He makes me laugh with the way he runs–that classic toddler run; what self-respecting toddler will walk when he can run, feet slapping the floor (eighth notes at q=120), frequently giggling?

He will not talk, but when I look at him I can see the gears spinning. He looks like my dad’s family–the shape of the eyes in particular. His brothers have these wide, limpid brown eyes that pierce the soul. They’ll flatten every girl they turn those eyes on. Alex has already had girls chase him around, trying to kiss him. He doesn’t even pretend to dislike it. 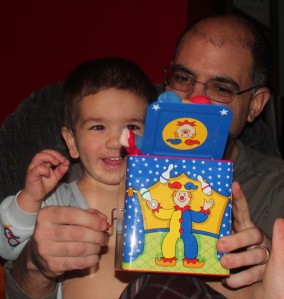 But Michael’s eyes are mischief eyes, glimmering at all times with a spark that intensifies as his eyes narrow beneath one of his many giggles.

I don’t know how I got such a good-natured child, but I have a theory. My theory is that he wasn’t held or touched much for the first ten days of his life–he spent it hooked up to heart leads and pulsox monitor. He spent it cuddling with a sheet and an oxygen hood. And when he got out of that nonsense, he just came into real life with a gut knowledge that life is beautiful, and he’s going to enjoy every minute of it.

Then again, maybe he’s just holding it all for age three–the worst age, as far as I’m concerned.

But I can always hope he’ll just stay this way. Because he makes me so happy.