We had a friend over for dinner last weekend, and as we were asking her about her studies and her plans for the future, Alex sat across from her shaking his head. “This is why I don’t want to grow up,” he said. “There’s too much work.”

This reminds me of what I always say about my two younger boys. Nicholas is desperate to be a big boy. Michael thinks he IS one.

Michael’s been in speech therapy since the beginning of March, and I don’t know that I’ve talked about it much. We’ve taken the last two weeks off because his therapist was out of town, and Michael took so long to warm up to her–he’s been going through a raging case of secondary separation anxiety–that I didn’t want to set him back by having a sub. She says he works very hard, but it’s really difficult for him to make the various vowel sounds. He does have one very consistent word now–“Ma-ma!”–and a few inconsistent ones–baw (ball), tsoo (juice), meh (milk) and “wa-wa” (water). He also calls every color purple: “poh-poh.” He can point to the right ones, he just calls them all purple. And although he can’t talk, he makes an engine noise, something between “zoom” and “shooo” and “brrrrrr,” to illustrate all his various engine-powered toys.

See, this is why I don’t talk about Michael’s speech therapy. Because lists of words are BOR.ING.

So let’s try something different. 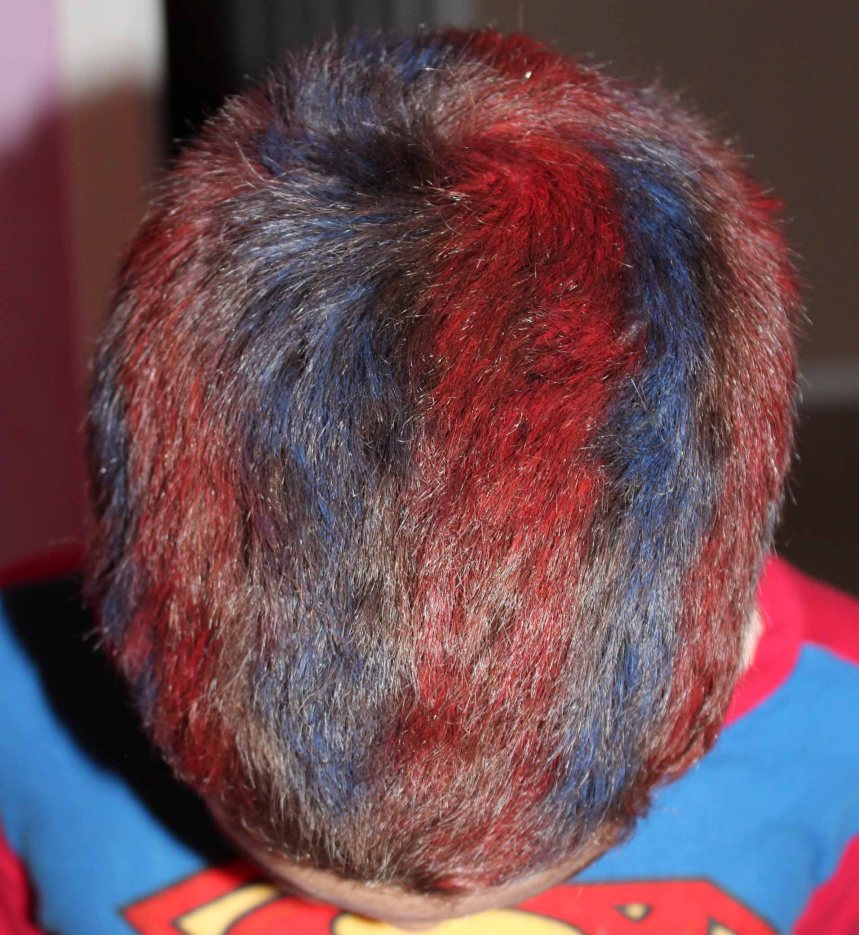 What in the world is THIS?

Oh, it’s just my 9-year-old’s head after he visited the hairspray booth at Julianna’s school festival.

Why yes, in fact his head does still look like he’s on the set of a bad horror flick every time he takes a shower. Thanks for asking.

We have a nest full of baby birds in the bathroom vent for the basement bathroom. They are really noisy. About every three minutes they send up a chorus of chattering that lasts ten seconds, and then stops again. All I can think is that every time something moves outside their vent, they think it’s Mama Bird bringing them juicy worms or whatever they eat. Man, and I thought my bunch never shut up.

Yesterday Michael decided he needed a snack an hour before dinner. He got in the refrigerator, perused the offerings, and brought me….wait for it…

One of the unanticipated benefits of teaching natural family planning classes in our home is the way the information permeates the kids’ environment. I did a series of interviews a couple of years ago with families who were second-generation NFP users. I wanted to know what made the message “take.” I asked them how they went about The Talk, and do you know what they said? “We never did The Talk. It was just in the air.”

The more I think about it the more convinced I am of the wisdom of this. The Talk is a big, threatening thing, and it compartmentalizes a topic that should not be compartmentalized. If we are going to live our lives through the lens of our sexuality, then we can’t treat it like it’s a one-and-done lesson. It has to be part of everything we do.

Clearly we’re on that path. Crossing my fingers that it works as well for us as it did for the people I interviewed.

Fastest-written 7 quick takes ever! Go me!