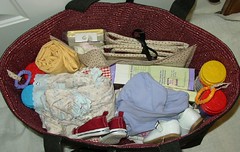 I’m not sure what he had on his hands. All I know is, it was wet and shiny, and his mother didn’t want him to touch his hair. “Hands up!” she said, and the two-year-old put jazz hands by his ears while she turned around and dug in her camouflage bag. She came up with a pack of baby wipes, which she opened with cool efficiency and cleaned off all the offending substance.

It was blistering hot on the ballfield last night, and Nicholas was sweating even before his first at-bat. I watched as another mother got up and approached the fence behind the dugout with a cross between a mister fan and a spray bottle. “Here you go,” she said, and three boys turned their faces toward her as she triggered them with a cooling mist.

The opposing team’s dugout held a neat row of red baskets decorated with stars and rainbow-lettered names, which contained all their gear.

I once took the baby and the toddler to my parents’ farm for a whole day…and forgot the diaper bag.

I thought I was doing well to remember to bring leftover pizza and a single water bottle with us. It even had ice in it. Although the ice was gone and the water lukewarm by the time the game started, and since there was only one, Alex had to go without.

How do those M.O.M.s do it? What neurological connection do they have that I don’t? And how did they get it? Is it something you can purchase on Amazon?

Then again, maybe I need to go easy on myself. I have more kids than most people and they’re closer together than most people have them. My life these days is a tremendous logistical puzzle that must be solved and re-solved on the fly. Like at the beginning of the school year, when I had to figure out how to pick up one child at the Catholic school at the exact moment his sister was being dropped off at home by the public school bus–all without sacrificing the baby’s nap.

When women say stay-at-home motherhood is not a waste of their brains, this is what they’re thinking about. Who has to go where, when; games moved to new fields with no notice–prior or at the time. How to get everyone fed without waiting until it’s too late at night for good health.

Logistics. There’s always a solution…well, almost always…but it can be a real brain teaser to prise it out.

Alex, these days, is on the way to thinking he knows everything. Every time we load up and I lay out the agenda (because things go better if the kids know what to expect), he starts asking questions that begin with “Why don’t you….” and “Why couldn’t we…” It’s a constant reminder that when I graduated eighth grade, the quote my classmates remembered me for was “Well you know you could…” I didn’t remember ever once saying that, but I must have, and it certainly illuminated why I had a reputation as a know-it-all.

To my own budding know-it-all, I say: “Alex! I spend my entire life figuring out how to make this stuff work! Trust me when I say, this is the best way!”

Well. The best I can manage without the magic Amazon M.O.M. gene, anyway.