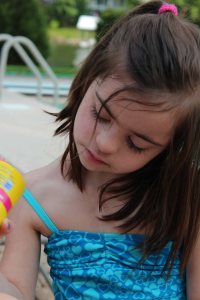 There must be some Murphy’s Law of parenting that says the moment you make a big decision and put it into play, you begin to second guess yourself.

The decision to have Julianna repeat first grade is the right one. I’m still certain that she’ll benefit greatly from it, but I’m intimidated by the transition. How do I explain to her why the rest of her classmates are leaving her behind? I tiptoe around this topic the way most parents tiptoe around questions of sex. Give me the birds and the bees any day. I’ve got that one covered.

We decided to hold her back in religious ed classes as well. She’s had her head stuck in books during Mass for so long, she’s not even begun to conceptualize the Eucharist, anyway. I figured the extra year would do her good before she receives the sacraments.

We retired the church books a few weeks ago. Now that Nicholas is entering kindergarten, it’s time to knuckle under and get both our middle children participating in the Mass. That was one of the many tasks that got tossed in the “whatever, we’ll get to it eventually” pile when the fourth child came along.

Let’s just say Julianna has not taken kindly to having it moved up the docket.

So. Yesterday. Pentecost Sunday. The boys staying with me, Julianna sitting with some of the other choir children. Communion comes. I’m playing piano so Christian can go receive. He comes back and takes over for me. I look around for my children, to bring them with me. Julianna is missing, but I figure I’ll unearth her somewhere in the Communion line. Sure enough, as I round the piano, the line parts and a little girl in red comes walking against the flow of traffic with her funny, side to side gait and a big grin on her face. I take her by the hand; she’s already been up to receive her blessing, but I want her under supervision. Her wrist is slim. I can wrap my thumb and middle finger around it with room to spare. She feels so fragile, and yet I know how tough she can be when she wants to be.

We reach the front of the line, and I move her ahead of me. As I bow in preparation to receive, Julianna’s hands go up in a pretty good approximation of the reception posture. A look of bemused exasperation crosses the Eucharistic Minister’s face. She dodges Julianna’s hands and puts a hand on her forehead: “May God bless you,” she says–again, as is clear from the look on her face. I lower Julianna’s hands and we step to the side to receive the cup. Julianna reaches for it. She’s got her hands on it. The EM is looking a bit panicked. Has no small child in the history of Catholicism ever tried to hijack the Blood of Christ before? “No, Julianna,” I whisper, and lower her hands again.

Julianna buries her face in her hands and launches her victim routine. I guide her back to the music area and sit at the end of the row of chairs, as far from the microphones as possible. While the choir leads  “Spirit Blowing Through Creation,” I pull her onto my lap and try to explain that she’s not ready to receive Jesus yet. But it hurts, because I can’t even say, “Less than a year, sweetie.” Because it’s still two years away. Just like it was at this time last year.

Is this just Julianna being cute and charming and a pain in the patootie? Or is something being born within her heart and mind on this Pentecost Sunday, something I would be wrong to stand in the way of?

I don’t know. It’s very, very difficult to be sure what she understands. Communicating with Julianna requires tremendous mental concentration and creativity, plus a fair dash of guesswork and context clues. She answers “who” and “what” questions with “because,” when she answers at all. Often she stares blankly at you or buries her face in her hands.  I don’t know how she would even go through a first Communion interview to determine her readiness. I’ve finally begun to talk to her about faith–for a long time I didn’t, because we couldn’t even communicate the ordinary stuff of life. But isn’t desire more important than cognition, anyway?

I’m overthinking this, I know. It will unfold in time, as it should. Still, it hurts to tell my kids no, especially when they’re asking for a gift I want so badly for them to know and to hold dear, as I do.

3 thoughts on “Julianna Attempts To Hijack the Eucharist”