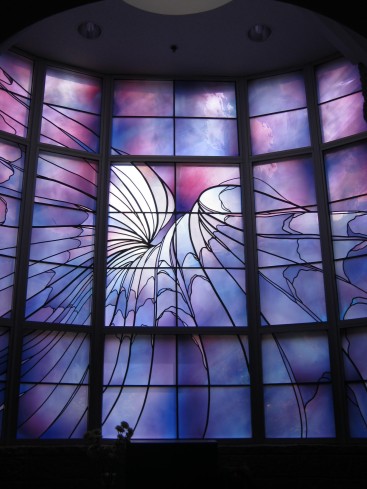 Every afternoon around 1:15 I put Michael down for bed. He’s really too big to be carried now–it’s hard to imagine, but he will soon be three years old, and getting him to do as I wish is no longer a matter of I’m-bigger-than-you force, but genuine leadership. I’ve learned that making nap time into a game will get him up the stairs, and the ritual of tucking in involves lots of giggles and nice kisses and big hugs and nice hugs, and raspberries, of course, can’t forget those–on the neck, on the tummy, on the palm of his hand. At the end, though, he reaches a point and he says, “Enough!” E-nuff. It’s amazing, for a child with significant speech delays, to have such a perfect grasp of that concept. Enough.

Because I don’t really have it figured out.

When I stop to take stock of my life, I see how amazing is:  having once believed that I had nothing to offer and no chance of finding a life partner, I have an amazing husband. Having once thought I could not bear children, I have a house full of them. And they’re all beautiful and well behaved and well adjusted. Having once been without a car, I now have three, I’m embarrassed to say, although the truck is only still around to haul things around town.

And yet I always feel dissatisfied. If only I had a quiet dishwasher, with a door that wasn’t broken. If only I had just a bit more style, like that friend or that acquaintance. A few more accessories. One of those hanging-pot things for the kitchen. Money to hire a cleaning service.

I also don’t seem to know how to say enough in my commitments. This fall I simply circled the wagons and decided I wasn’t going to volunteer for classroom parties, fundraisers or anything else, because I’m just stretched too thin. But even the obligations that remain are more than I really have time for–yet I don’t feel I can step back, because I haven’t been able to find anyone to replace me.

It is most obvious, though, in my professional life. I’ve published religious books. Won an award for a column I never even in my wildest dreams would have considered asking for; it was simply offered to me. I have published short stories, music for the Church, and instrumental music, some of which still blows me away when I play it; I can hardly believe I actually wrote it.

But it’s never enough. I always want more. More, more, more. And I think, in defiance of my own reason and experience, that if only I could reach that next plateau I would be satisfied. If only I had a better wardrobe. Enough jewelry. More time to get things done. More volunteers. More, more, more. When will it ever be enough? Never.

This, to me, is one of the most profound proofs of the existence of God. Because we always feel incomplete. Built into the human psyche is a longing for something greater, something beyond what our eyes can see and our skin can feel. We try to fill it with a million things tangible and intangible in the world, but it’s never, ever enough.

St. Augustine’s prayer is so true: our hearts are restless, Lord, until they rest in You.