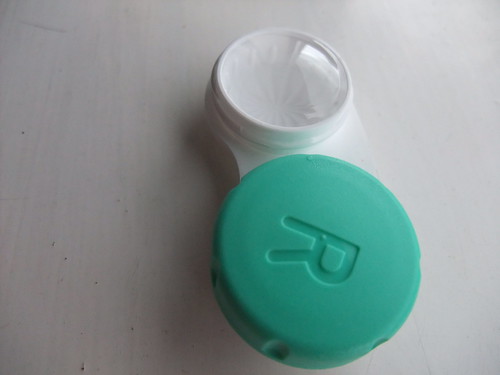 In junior high, I started wearing soft contact lenses. We had this system of sterilizing the contacts every night. You would put them in the case, put the case in a little electric box, close the lid and push a button, and it would boil the contacts for about an hour.

I was really paranoid about my contacts. Afraid that I would lose one. Every night, I screwed the cap on tight and then opened each side back up to check to make sure I’d really put those almost-invisible pieces of flimsy plastic inside. Then I’d close them up again, only to panic because what if, in opening the case, I had accidentally jostled them out without realizing it?

I would repeat this process three, four, even five times, in sheer, abject—and completely irrational–terror. Every single night.

You might think I’m exaggerating, because it sounds ridiculous, but I’m not. This was my normal world.

Being a pretty smart girl, I knew this was not okay. At some point, I started taking my paranoia in hand and refusing to allow myself to check a third or fourth time. But I often lay awake shaking with anxiety. It was not a great tradeoff, but that was what it took.

I suppose I have to admit that I’ve been wrestling with some form of anxiety (OCD?) for most of my life. I always hate to say something like that, because I’ve never been diagnosed with any such thing, and it seems presumptuous to act as if my struggles compare to those of other people who really have these conditions.

On the other hand, how many people go through life with a vague, terrifying—terrifying because it’s undefined–sense that they’re fighting something they shouldn’t have to fight? Afraid to admit it, lest they be labeled or told they need help?

Anxiety impacts the most banal facets of existence. The ability to get to sleep…or get back to sleep. The fear of having offended someone by saying the wrong thing. That one can impact sleep for days. I would rather pass off most responsibilities around the house to my husband, because then I don’t have to worry about whether I forgot something important. Planning for trips. Oh, man, that’s a doozy. You pack a suitcase, and then you can’t see what’s in it anymore. Did I really pack (fill in the blank), or did I only plan to do it?

I used to think I could engage in mental wrestling matches with my irrational fears, but I soon discovered that they fed off the conflict. I finally learned that the only coping mechanism is to think it through once and then ignore the mental screaming, the same way I ignore the whining of a kid who’s hoping said whining will make me change my mind about turning off the iPad/Wii/TV. Nothing I can do will make that whining stop. I just have to pretend it isn’t there. And eventually, the whiner gets bored and goes off to bother someone else.

Ignore it, and throw myself upon the grace of the Holy Spirit.

I think about that old contact sterilizer almost every night these days, as I take out my gas permeable lenses and put them away. The case I’m using at the moment is green on the right side and white on the left. I can see the hard blue lens through the left cap, but the compulsion to double check the right contact remains very strong. In fact, I usually do. But only once. Then I put it out of my mind, because by the grace of God I’ve learned to do so.

I can’t pretend to be an expert on how to handle irrational fear and anxiety. I would like to think that the spiritual stretches I have been dragged kicking and screaming toward would be helpful for others, but the fact is I only have my own experience to measure. I only know that it is a good soul stretcher for me.

Others who have been down this road: what coping strategies have helped you?

3 thoughts on “Checking My OCD Tendencies”