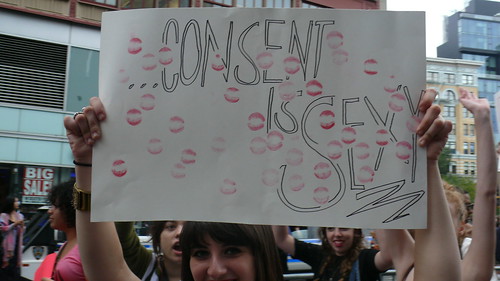 That’s what the t shirt said. And clearly, the woman wearing thought it was a good slogan.

But really? “Consent is sexy”? That’s the standard we’re shooting for? As long as they get permission, that’s enough?

Just how low are we going to set the bar?

There’s a truism about expectations. I’ve mostly heard it in the context of education: that people will live up to your expectations, or down to them. If that t shirt is any indicator, the bar we’ve set for how we expect to be treated is so low, it might as well not exist. As long as a guy doesn’t rape us, we’ll flatter their ego and call them sexy.

On the scale of sexual attractiveness, consent doesn’t even register. Consent is a prerequisite for claiming to be a man. If we women, in the name of sexual liberation, have chosen to fling ourselves at the feet of men for nothing more than “consent,” then we have brought ourselves very, very low indeed.

Among men who are part of a couple, 75% say they always have an orgasm, as opposed to 26% of the women. And not only is there a difference in reality, there’s one in perception, too. While the men’s female partners reported their rate of orgasm accurately, the women’s male partners said they believed their female partners had orgasms 45% of the time. (From WebMD)

So not only do the men get more out of sex, they’re also clueless about how little their partners get out of it.

And this is okay because…?

If a man wants to claim the moniker “sexy,” he needs to do way, way more than just ask permission. I realize this is a radical concept in the modern world, but sex is the capstone of a relationship, not an audition for it. Relationships between men and women have always been troubled because we’ve failed to make the effort to understand and respect each other for what makes us different from each other. But in the modern world we’ve taken it to a whole new level by making sex the end-all-be-all of existence.

And if WebMD is right, women haven’t gotten much out of the deal. Why are we so concerned about our God-given right to have sex with as many people as possible? What are we getting out of it? Has no one else ever stopped to ask this question?

Women were more likely than men to show inconsistency between their expressed values about sexual activities such as premarital sex and their actual behavior.

I can’t say for sure, but I think that means women say they recognize that sex is the capstone, not the audition, but their behavior says they’re willing to let men dictate the terms of the relationship.

So much for women’s liberation.

Down deep, I don’t think any woman really thinks this is okay. The focus on romance in fiction aimed at women indicates that we are all seeking authenticity, understanding, and dare I say it, something holy in a romantic relationship. Or perhaps a better word would be transcendence: something in our partner that gives us a glimpse of a reality beyond what we ever thought was possible.

To my fellow mothers–and fathers, too–I say this: we are the ones who form the next generation of men to view women with respect…or not. And too often we shirk our responsibility to point out what is wrong in the world, simply because it’s awkward. We’re so uncomfortable with our own brokenness where sexual matters are concerned, we feel unable to address the subject with our children.

But we have to get over it. We have to confront the ugliness within, look for healing within ourselves, and summon the courage to tell our children–beginning at a very young age–how the world is supposed to look.

Because they deserve better. And so do we.

5 thoughts on “Consent is NOT Sexy”