At some point, I stopped writing about Down syndrome.

The first two years, it was always front and center. Five therapies a week. We hardly went anywhere, between naps and home visits.  Our wonderful PT took to meeting us at the library or the park so Alex wasn’t confined to home just because Julianna needed therapy. And then there was the medical drama. Julianna had respiratory issues that meant every cold seemed destined to morph into at least an overnight observation in the hospital.

And then she started early childhood special ed, and there were the cute bus moments. And the long discernment of whether or not she’d be able to attend Catholic school with her brothers.

But just like every other child you add to your life, things settle in at some point. Julianna outgrew her respiratory problems and got in the swing of school, and suddenly one day, we found that Down syndrome had sort of woven itself into the fabric and become nothing more than normal life. 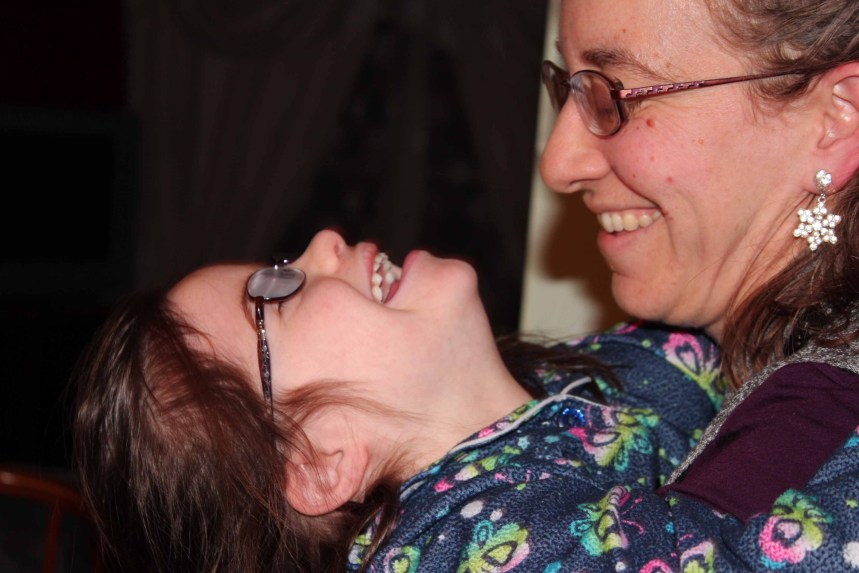 It’s not like we’ve forgotten we have a child with Down syndrome. But it’s no longer the single factor that controls every facet of life. It’s just the thing we have to keep in mind when we’re thinking about interactions with Julianna–just like we think of the words “strong-willed” when we are interacting with Nicholas. Both those descriptors require us to adjust our reactions to situations as they come up, but it’s not something that requires a plethora of blog posts anymore.

Down syndrome is normal.

Down syndrome is an almost-8-year-old girl who can still wear all her size 5 clothes, but is really tired of them, only she won’t tell us so, because she’s just not built that way. Instead, she goes into the drawer full of clothes we’re banking against future growth and dresses herself in a pretty red sundress on a 20 degree day. And it actually fits. And because she loves it, and took the initiative, I put a poncho on her and let her wear it anyway.

Down syndrome is a life enriched by Frozen, Tinker Bell, music, pizza, ice cream, and pasta. Down syndrome is a girl who rides a white-and-purple bicycle with streamers and a light-up basket (and training wheels)–all by herself. Down syndrome is getting a purple umbrella with her name on it for Christmas (painted at Magic Kingdom) and screaming with excitement. It is birthday parties and playgrounds and swings and the Wii. And if you’re thinking, “But that’s all so normal,” well….that’s exactly my point.

Now, I must be honest: Down syndrome is also agony in math. A.Gon.Y. It is a paraprofessional and speech therapy and special instruction, adaptive P.E. and thousand-dollar shoe inserts (good health insurance is a lifesaver).

But it’s also a fan club that you would think follows her around if it wasn’t for the fact that you’ve finally realized she builds it on the go. (I really think she’s the most popular student at her school.) It’s a girl who’s still small enough to be picked up and snuggled at age eight…and who loves to do it, just because she knows it turns Mommy into a pile of goo.

Most of all, it’s a chance to have my world, and my heart expanded, and an invitation to cast wider the net of what constitutes “normal.” Because really, who got to decide what is “normal,” anyway?

10 replies to Down Syndrome Is Normal