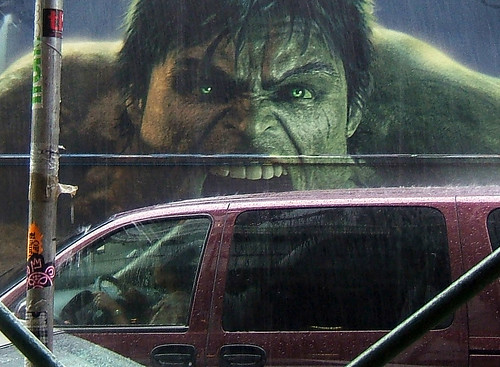 Three times in recent weeks, I have drawn the ire of other drivers. It’s enough to make me soul-search whether the problem really is me.

The first time, I’d turned the engine off at a long light and the car behind me wasn’t happy with the extra second it took me to get moving forward when the light did finally change. No brief tap of the horn for her; no, she expressed her displeasure with a protracted blare and then tailgated me for the next mile. I got a speeding ticket on that stretch of road a few years ago, so I always keep my speed under control there…but I admit I took great pleasure in doing so that afternoon.

The second time, I was preparing to turn left off a two-lane highway. I’d started to lean left when I realized the oncoming car was close and moving fast, so I decided it would be safer to wait. The pickup behind me leaned on his horn….and held it…the entire time the car was approaching and passing. I thought that was beyond obnoxious, so I deliberately waited an extra second to turn, just to make the point. Which caused him to continue holding the horn the entire time I turned left, and for about a tenth of a mile after he roared on down the highway.

The third time, I had a car full of kids, not all of them mine, and I exited the interstate to find the left-turn lane unusually backed up. After about four minutes I realized the sensor was malfunctioning and we weren’t going to get a green light at all. Waiting wasn’t an option. I had to take the carpool kids home and get back to our house before Julianna’s bus. The solution was to pull into the right-turn lane instead and find a place to turn around somewhere down the street.

I couldn’t see around the traffic behind me, so I poked my nose out far enough to give me a sight line. And then I stopped, because there was a car flying up the ramp. I let him get past and then pulled out behind him.

As he sat waiting to turn right, he fisted me a predictable middle finger. And then, apparently deciding my lack of reaction meant I hadn’t seen it, he did it again.

All this has me evaluating my own habit of assuming the worst of other drivers. We all think whatever speed we’re driving is the right one, whether it’s below, at or over the speed limit. If someone wants to go faster they’re obviously bad drivers in far too much of a hurry. If someone’s going slower than we want to go, they’re obviously bad drivers who shouldn’t be on the road at all. When I’m running late I blame everyone else for holding me up—how dare they?–even though, hello, it’s my lateness that’s causing my stress. It’s no one’s fault, and more importantly no one’s problem, but my own.

It’s so easy to let little things get under our skin. Too often, too many of us (myself included) walk around with a general sense of rage at a constant simmer, just looking for an excuse to erupt…and in some cases, for an excuse to pick a fight. (Facebook, I’m looking at you.) I can’t tell you how many times I’ve written a snarky, provocative comment on Facebook, thinking it’s my God-given right to opine, and teeter on the edge of “submit” for agonizing seconds before selecting all and deleting.

There are times—like this week—that seem to overflow with irritations and inconveniences. They challenge my resolve to “treasure” the good and brush off the bad. So maybe it’s a good thing to get honked at and flipped the finger occasionally. Because the jarring overreaction it represents reminds me what’s at stake.

4 thoughts on “Road Rage And Other Rage”