(because this is one of those weeks when polished, focused blog posts just ain’t happenin’, folks.)

1. The universe is unfair. When my kids get the stomach virus, they wake up in the middle of the night and then they go back to sleep, and come morning they’re raring to go: lightsaber duels and the whole works, and a whole day off school!

Me? I throw up and I feel horrible for half the next day, and yet I have to take kids to school and the car to the shop.

The universe is unfair. That’s all I’m saying.

2. So we got this game for Christmas called “Tall Tale.” They’re circular cards with pictures on them, and in the simplest form you pass out the cards and take turns building a story off the person before you. It leads to great hilarity.

Nicholas: “There was a hot girl surfing, with her daughter.”

Alex: “And the mom had a boyfriend who had a motorcycle.”

Me: “So he took them to his secret mad scientist lab, where he was trying to create superhero ants.”

Nicholas: “And he had a dream about the ants and a big scary monster.”

The trouble is, now Michael knows it makes us laugh. So every time his turn comes up, he stares at his card very hard, as if he’s thinking. Then, without lifting his chin, his little twinkly eyes look sideways at someone in the circle, and he gets a Mischief Grin…and out comes:

He thinks he’s soooooo funny. (He gets that from his daddy.)

3. Speaking of so funny, I just have to enshrine this Facebook thread from yesterday afternoon: 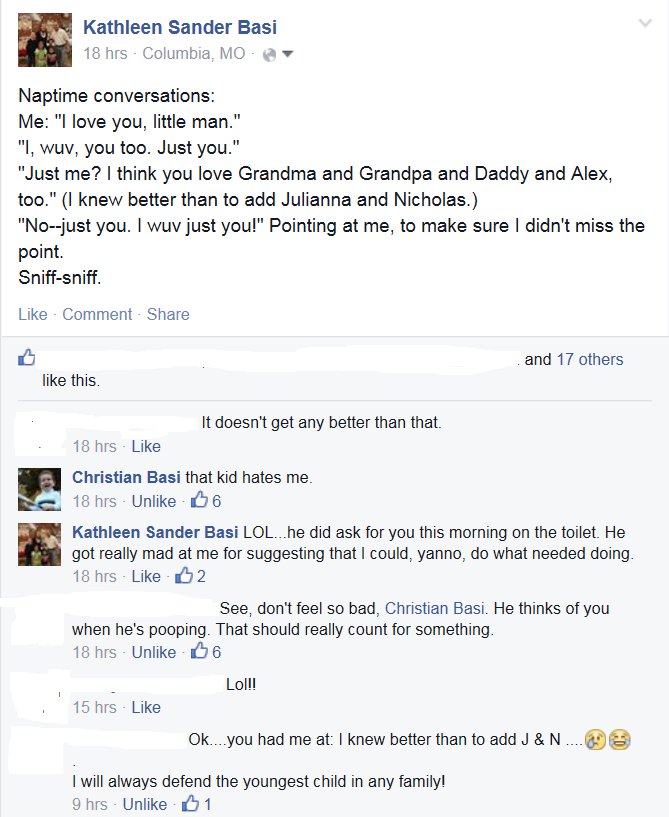 4. Talk about a seasonal muddle at the end of the first full week of Lent! I took this picture last night: 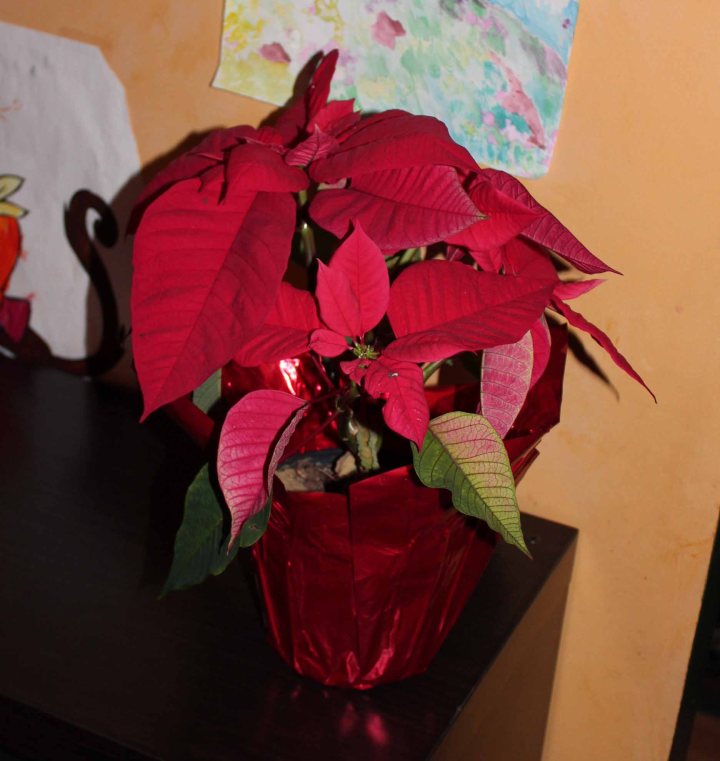 At this point I’m on a mission to have both an Easter lily and a pointsettia gracing my kitchen on April 5th. Think we can do it? 🙂

5. Speaking of Lent…Alex decided he would limit his screen time to half an hour a day as a Lenten discipline. Which lasted about four days. Yesterday he asked if he could change to something else. Like not yelling at his siblings. I said, uh, YES!

Want to hazard a wild guess what made me think of that just now?

6. Speaking of Alex…he’s still two months shy of ten, and his feet are virtually the same size as mine.

Wait, I am wrong. She’s wearing socks under her tights.

Wait, I was still wrong. She was wearing ONE suck under her tights.

Well, look at that. I just wrote a 7 Quick Takes post. Only I don’t have time to visit everyone else, so I’m just not going to link up. But if you like 7 quick takes, you can find them here. Anyway. Time to be done, because it’s yet another day off school. Library, groceries, laundry and baths are on the agenda for today. Time to get moving.