I am the second of four girls who grew up in a house with one bathroom and one TV. When I was pregnant for the first time, people kept asking if I thought it was a boy or a girl. I kept saying “girl,” but about three weeks before Alex was born, I realized I didn’t think it was a girl, I just wanted it to be a girl, because Girl was all I knew. And I realized I’d better get my head on straight.

That turned out to be a good call, given this:

When people talk to expectant mothers about raising boys, they seem to focus in on spraying while diapers are being changed. Which, although true, is really not a full picture of boyhood. So I thought today I would share a few of the things that come to mind when I think of raising boys. Some of these things make me laugh. Some make me want to cry. Some make me want to pull my hair out. And others do all three depending on my a) mood, b) hormone levels, and c) how much time has passed.

I hope you enjoy.

1. A piece of string and four garden stakes = two hours of entertainment. At least, when you have friends over.

They have three volumes: off, loud, and deafening.

They are incredibly destructive, and completely without malice in that ability. They break Ev.Er.Y.Thing. Even things you don’t think particularly can be broken, like door stops and light switch plates. Christian made the mistake of leaving his Dremel on the kitchen counter while they were sanding a pinewood derby car, and Michael found it and sanded a hole in the countertop. 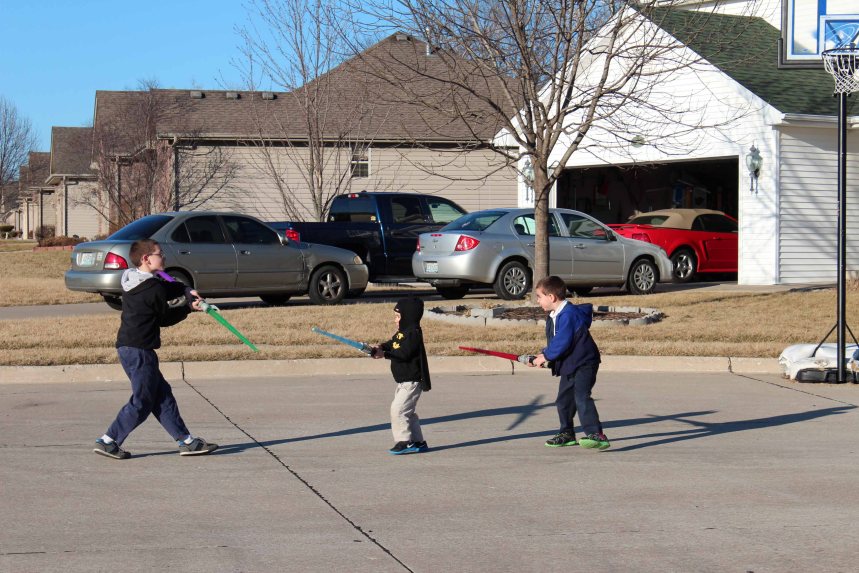 If you tell them to wash their hands they will act as if you are asking them to pull their own fingernails out.

If you tell them to put their clothes in the laundry because it’s dirty, they’ll say, “What dirt?”

If you tell them to wash that dirt off their faces, they will look in the mirror and say, “What dirt?”

In the car, they play things like “The Spaceship Game,” which involves a captain, copilot and gunner. But they all shoot semi tractor trailers.

They are completely incapable of keeping clothes nice. And by “nice,” I mean: not ripped in the knees. I am remiss. I failed to take a photo of the pile of ripped uniform pants I finally threw away two weeks ago. And I do mean a pile.

But all that aside, there’s a fresh sweetness to boys–at least, to boys who are raised to be empathetic and kind–that is a joy all its own.

Before I had boys, I really only wanted girls. Now, I have a pack of boys and one completely atypical girl. I sometimes wish I could have had the experience of raising a typical girl, but mostly, I’ve realized I was always meant to be a mother of boys. And hey. I get to raise the boys your girls turn to puddles over, because they’re so sweet and thoughtful and all that masculinity was meant to be.

And that’s quite a privilege.

6 replies to Raising Boys: The Good, The Bad and the Ugly