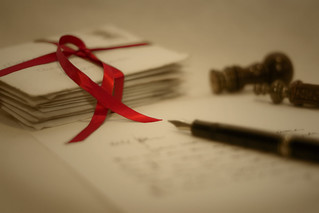 My grandmother once told me that she and my grandfather wrote many letters to each other before they got married. He was in the military, stationed in California, and she lived with her family in mid-Missouri.

Being very interested both in stories and in family history, I perked up. “What happened to those letters?” I asked. “Can we read them?”

“Oh, I don’t have them anymore,” she told me. “They got thrown away in some move over the years.”

I’m sure I gave her a dazed look. I couldn’t understand how something so obviously precious could be put in the discard pile, no matter how many times you moved (I’ll grant you, my grandmother and her ten kids moved a lot of times).

I didn’t understand until yesterday.

You see, yesterday I began plowing through the accumulated saved mail of two forty-year-olds’ lifetimes. Let me introduce you to our catch-all closet:

Look, I have a red ribbon around my letters too. Or, well, a piece of yarn. Don’t you see it?

Over the years, Christian and I have both gone through the memorabilia and ditched about half of it. But neither of us have ever had the energy to tackle all those shoeboxes full of cards and letters. (Letters. Remember those?)

You see, I have to clean out half of this closet. Julianna, at 8 1/2, needs to quit sharing a room with her brother, who is no longer a baby. But if Michael has to move in with Nicholas, then Alex has to move downstairs.

So I’m purging. As I sifted through the box containing the first two years of our marriage, I found Christmas cards from random parishioners, invitations to ordinations, and birthday cards with neither date nor personal message written on them. And I realized:

For most of my life I have been a hoarder.

These days, I am ruthless. When you have four kids, especially little ones who bring home half a ream of paper crafts a week, you have to be. If I was a hoarder these days, every time we opened the front door, it would look like Hogwarts invitations coming out of the Dursleys’ fireplace.

As I was tossing birthday cards with no notes, only signatures, I had a moment of self-doubt. That’s my grandmother’s signature. She’s not going to be around forever. Shouldn’t I keep that?

No, I decided. No, no, no! I have letters in her handwriting. I do not need every card she ever sent me! Into the recycling with you!

Then I opened another card containing only a signature. The signature of my other grandmother, the staple of my childhood, who died two and a half years ago. And I instantly started crying. Not much. Not for long. Just long enough to give me pause, and make me pull back a bit.

I suppose the reality is that in this, as in everything else in life, balance is a moving point somewhere south of preservation and north of progress. It’s a tension that informs writing, as well. Not every note I write, every word that comes forth from the mouth of cough-cough-genius-cough-cough, actually deserves to be heard. But sure as I hit “delete,” I want it later. So my poor editor got a music file a couple of weeks ago entitled “This Joyful Is A Mess,” with a note to ignore those last twenty measures, because I just wanted to hang onto them in case I needed them later.

And as for the basement closet, well, I figure, if I purge even a third of that mess, it’s going to make a huge difference!

10 thoughts on “Hoarding And Purging”