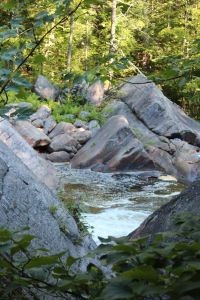 I’ve been hearing about the Adirondacks my whole life. But trying to plan our recent trip by using the Great Google was less than successful, so I thought I’d compile my list of things I wish I had known before we went to visit. Note: we were in the extreme southeastern corner of the park, northwest of Lake George, so I can’t promise that everything below applies to the whole park, but I would guess that much of it does.

1. Although it is bigger than the biggest three national parks put together (at least, so we were told by a local), it is not a national park, it is a state park, and the services and amenities are not as easily available. This includes maps, restrooms, access to water fountains/concessions, and so on. It’s more like an enormous nature preserve, so you have to come prepared with your own water containers and snacks. Because it is remote and not overdeveloped, it is breathtaking and amazingly, beautifully quiet, with soul food around every bend, but you have to come prepared. 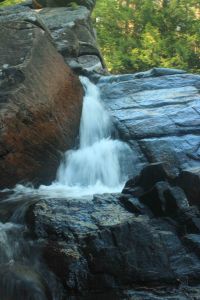 2. If you look at the Adirondacks on your Google map, you’ll see patches of white and green. The Adirondacks were preserved by the state long after people had purchased land and established towns within the borders, so all the white is privately owned or incorporated—but it’s still within the park. Look to the towns if you want more touristy things to do. We stumbled upon a wine & cheese event being held by the Upper Hudson Valley Wine Trail, a conglomerate of a dozen or more wineries near I-87. The town of Lake George has a ton of attractions. 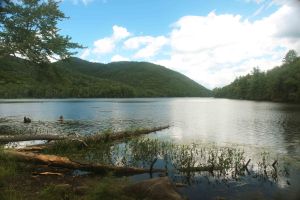 3. Invest in an Adirondacks guide book, because the ability to plan hikes online is negligible. Or, rather, you have to really know what town you’re close to, and then you can find their resources online, but there’s no good clearinghouse site that encompasses everything. I found this frustrating until we got there and realized why this is…. 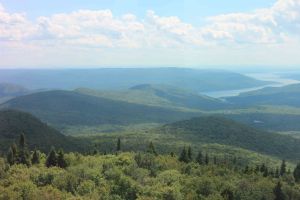 4. There is NO CELL PHONE SERVICE in most of the Adirondacks. We were told to expect that at the camp where we were staying, but we didn’t realize it applied to the entire area. Close to the towns you’ll have a signal, but you CANNOT plan your day trips and assume that you will have Siri ‘s dulcet tones giving you every turn to get to the trail head, because cell towers have been prohibited in the preserves by the state of New York. Plan ahead. Bring a print guide. 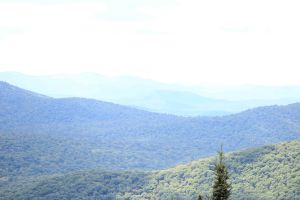 5. The concept of an “easy” hike in the Adirondacks is quite different from what would be considered “easy” in, say, Rocky Mountain National Park. We took the kids on an “easy” hike in RMNP when the oldest was eight, and it was fine because the trail switched back and forth when the going was too steep. The “easy” hike we took up Hadley Mountain in the Adirondacks, on the other hand, went pretty much straight up the side of the mountain for 1600 feet. In Jazzercise terms, it was like being at or near the top of the curve for fifty minutes, with the total ascent taking an hour and fifteen minutes. The views are worth it, but be prepared. 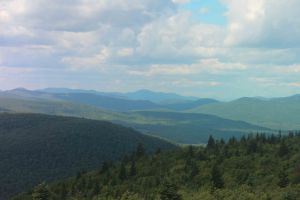 7. As I scan this list, it sounds discouraging, so I just want to emphasize that this rugged country is packed full of beauty and is oh so worth visiting. These are just a few things I wish I had known ahead of time so I could have planned better.

Monday I’ll talk about “glamping” (what a horrible word for such a wonderful experience) and share a little about our experience with it.

2 replies to Tips For Traveling in the Adirondacks