Ever since we shared what we were planning to do with our weekend away, people have been asking me to share “what was it like?”

I’ll start by saying that I really like traditional camping, but when I stumbled across Orenda while researching our weekend away, I thought: This is perfect. It’s unique. I mean, on a weekend away, who would choose to stay in a stuffy old hotel when you could do this?

Dave, the owner of Orenda, met us when we arrived on Friday afternoon and gave us the tour. His term for what he offers is “Adirondack retreat,” and he stresses that this thing people call “glamping” has really been around for a long time. He has pictures of 19th-century Adirondack camps to prove it, and the “lean-to”s scattered through the park are an outgrowth of that long-standing tradition.

So what was it like? Well, it was more open than you might think. The cabin is a canvas tent with no floor, mounted over a deck—a deck with gaps in the slats, through which you can see the ground. The first night, we had some critter scrabbling around underneath for a few minutes. There’s a sonic pulse emitter in the cabin to keep them out. The bed was extremely comfortable, and the rough-wood frame was made by a local craftsman. The tent was set up to maximize the breezes, with zip-open windows on both sides, a tie-back window at the head of the bed and the floor-to-ceiling zip entrance at the front. The tarp stretched over the top kept out the rain the first night. We had electricity but not cell service or wifi in the cabin, and a wood stove if we wanted it (which we didn’t—it was in the 50s, but we stayed cozy under the blankets).

Aside from the critter and the rain, at night there was nothing to hear but the whisper of the wind in the trees overhead. There wasn’t even any insect noise when we were there. I can’t emphasize that enough, the sheer quiet.

The steep paths down to “base camp” were lit with low-voltage lighting at night, but not enough to block what you could see of the stars through the trees. You don’t very often find a place where it’s so dark that the night sky glows, and Orenda is careful to preserve that experience.

There were two bathrooms, and between them an open-air sink (with hot water) where you had a small caddy and hooks for washcloths. They provided eco-friendly cleansers, moisturizers, even shaving cream—they were really quite committed to the preservation of this wilderness. In a different spot in the camp we had an open-air shower (tile floor), which was kind of a cool experience.

The base camp itself consists of two roofed pavilions—one of which is where they prepare the food–with a fire ring between. In this area, they have wifi. You need the wifi because as I said elsewhere, there’s virtually no cell service in the Adirondacks. The guests gathered here for dinner and stayed until they went to bed, wrapping up in throw blankets around the fire, chatting, having singalongs, and making s’mores. We weren’t expecting the community, but we enjoyed it. 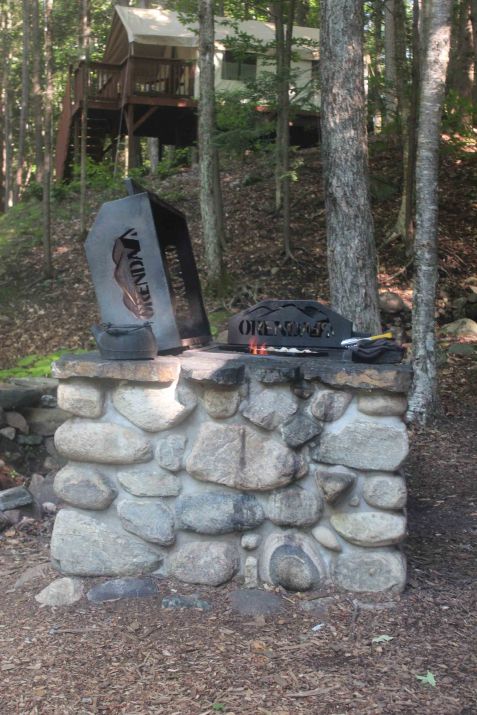 Here’s the thing I wasn’t prepared for: how easy it can be to sit back and just do nothing. While we were planning, Christian and I debated whether to stay two nights or three. We opted for two because, let’s face it, it’s a pricey experience, and we thought we’d want to get out and do something else, somewhere else.

We ended up wishing we’d booked the third night, because it was so wonderful. Orenda is remote, far from the touristy stuff you find in Saratoga Springs and Lake George, and with the camaraderie of the evening, as well as at breakfast time, it was easy to linger, to just sit still and read in the hammocks, or watch the fire. 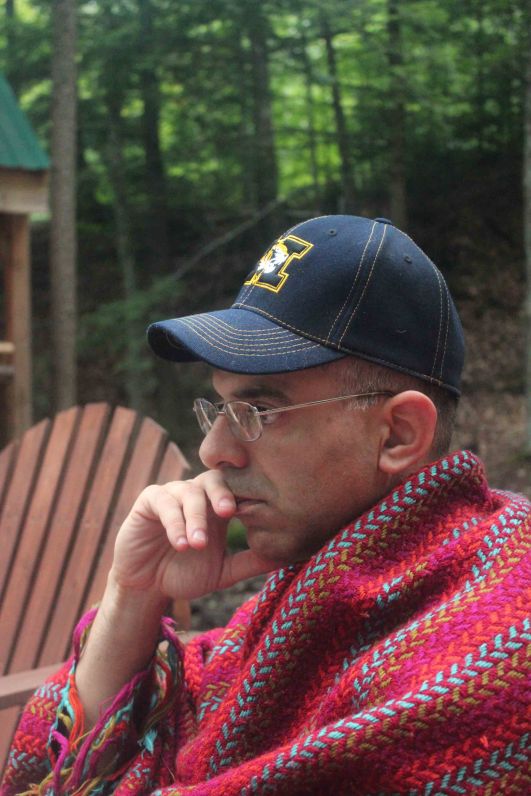 Besides, there was plenty to do nearby. We’d originally planned to take a 1 1/2 hour drive to Ausable Chasm, farther north, but we nixed that plan when we realized how much we were enjoying where we were. Orenda had archery on site, and Dave had cards with directions to waterfalls, mountain climbs, swimming holes and whitewater rafting within 30-40 minutes. (If that seems long, remember that you’re on mountain roads, so 5 miles can take twenty minutes.) We used Orenda’s kayaks at nearby Garnet Lake, where we paddled out to an extremely remote snowmobile path and hiked up to Lizard Pond—”just you and the bears,” as Dave said, and he was right; there was nobody else on that trail. They sent lunch with us for that excursion.

So in sum: remote, quiet, serene, and plenty to do. I am officially a fan.

3 replies to “Glamping” at Camp Orenda