People are frequently curious about what a child with Down Syndrome is like. I certainly wanted to know that when I was new to the world of disability. So I like to check in on “who Julianna is” every so often. It’s been a while since I did this, and Julianna is growing. Not particularly in size—she’s now smaller than Nicholas on both height and weight; she’s speeding toward age 9, but size 6 clothes still fit her. But she is definitely coming into her own as a girl. Not a little girl anymore. Just a girl.

So I’m going to take a snapshot of Julianna today. But let me caution that this is only a snapshot of one child with Down syndrome. I tell people all the time to think about their high school class. You knew there was a huge range in your classmates’ ability to learn and achieve; you’d never, ever try to take a portrait of one person and say it applied to everybody. With Down syndrome, that range is even wider. But, with that caveat aside, here’s a snapshot of my girl as she enters the second grade.

Singer: she’s not too particular about pitch, but boy, that girl has volume. At church she sings the Gloria and the Holy at such a decibel level that she carries over the amplified choir and the 800-odd people around her. We see the smiles flit around the church all the time; even the priest has one tugging at his lips. This past weekend we were in southern Illinois, in a church that seats quite considerably fewer than 800, and it wasn’t full. Those poor people had no chance. I watched with amusement as the faithful sitting two rows in front of us shifted, looked at each other, and smiled. A parent could choose to interpret any smile as making fun of their daughter, except it’s so clearly joy-filled. People respond to Julianna’s enthusiasm.

Social Butterfly: We cannot go ANYWHERE, and I mean that quite literally, without Julianna attempting to meet every person on the premises and tell them about her fire drill or that she’s going to be Anna from Frozen for Halloween. (Remember this?) She was going around IHOP in St. Louis on the way to Illinois this past weekend. And if there’s a child under the age of two? Oh, Heavens. You can’t pry her away. Most people, to my surprise, react to this blatant flying-in-the-face-of-American-privacy-and-individualism with smiles and grace. I’m always torn between trying to honor the gift of extroversion she has been given and trying to teach her that the rules apply to her too.

Goofy: I will just give you two conversations for illustration, both from our road trip this past weekend.

Christian: “Who wants some ice cream? I think they have vanilla and chocolate, and maybe even a swirl.”

Julianna: “I want CHOCOLATE! I love chocolate.” (She says this in a clipped tone of voice you can only call sassy.)

Julianna: ”Can I have some medicine in my spoon?”

Christian: “What? No, you don’t need medicine. You’re not sick.”

Bossy: She will boss anyone. But she does it with this silvery giggle that makes it utterly charming. And again, I’m caught between honoring her charism and trying to teach her social norms.

Solo dweller: After our summer reorganization project, Julianna has her own room, including a canopy bed that once belonged to her aunty. She loves it.

Tooth-clinger: Every time we go to the dentist I learn how many teeth my daughter has lost on the sly. Nicholas has been losing teeth this summer to great drama and refusal to pull them out, even when they’re grotesquely hanging by a thread. Whereas Julianna, the other morning, said, “here Mommy,” and handed one to me at breakfast. I didn’t even know she had a loose tooth. Because Nicholas had just had a tooth fairy visit that very night, this was the first time she knew what happens when you put a tooth under your pillow (or in a Ziploc bag, in our house). She was all giggly about it.

We still have to work to understand her sometimes—for instance, instead of “world,” she says “wehld;” instead of “girl,” she says “gel.” Still, she doesn’t need an interpreter anymore—except on the phone.

Math, so far, is not too bad this year. Instead, it’s reading comprehension that’s causing us headaches. 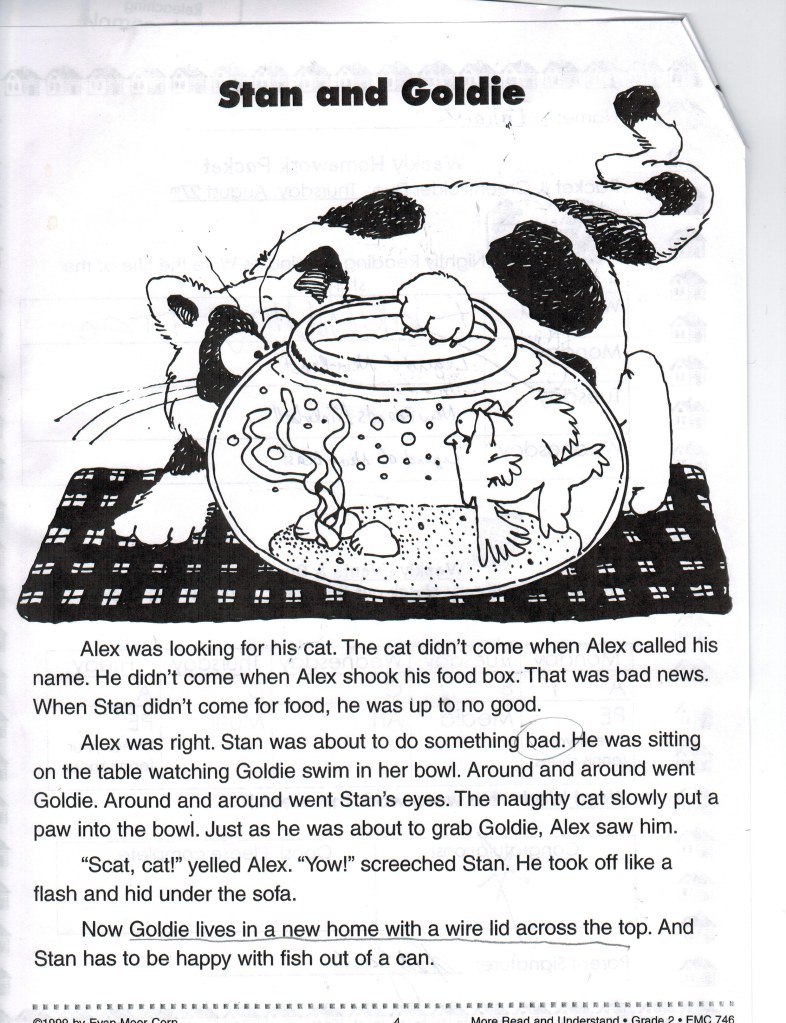 She’s very concrete. If you read the story above, you would undoubtedly be able to answer questions like, “What would have happened if Alex had not found Stan?” Typically-developing people can make intuitive leaps when things are not spelled out, like: the cat would have eaten the fish. But it’s never said that the cat wants to eat the fish; we’re supposed to figure out that he wants to eat the fish, based on his actions. But Julianna has no context for knowing that cats like to eat fish, and she certainly doesn’t have the cultural background to know all those cliché references to cats with their paws in the goldfish bowl. Most kids don’t, frankly, but they have the cognitive savvy to make the connection. For Julianna, those kind of leaps are not intuitive–maybe not even possible. She has this intensely concrete way of looking at life. It just doesn’t even compute for her.

This is wordier than I ever allow myself to be on my blog, so I’m going to cut it today. Do any of you have questions about Down syndrome or life with Down syndrome you haven’t seen me address? Leave me a comment and I’ll see what I can do!

5 replies to A Portrait of Julianna, Age 8