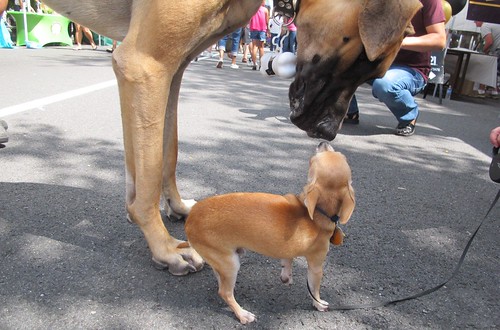 I was a really awkward child. I was forever saying the wrong thing. I was constantly misunderstanding people. I was hopelessly gullible, easily manipulated and hamstrung by my good intentions. I was a little too blunt and a little too analytical, with just enough social skills to know when I’d put my foot in it but not enough to do anything about it. And hopelessly introverted, so I felt it all keenly.

I haven’t entirely outgrown these tendencies, but I’m much better than I once was. And so it seems strange to me that public speaking has become such a part of my life. This week, for instance, my docket includes:

Last night’s presentation to the priests was kind of a big deal, and I had a lot of anxiety about it. If the list doesn’t give it away, it’s been kind of busy the past few days, and there weren’t enough minutes in the weekend to practice as much as I wanted to. But in the end, the Holy Spirit really stepped up to the plate, because things went better than I could have hoped.

And so, on my long late-night drive back home, I was basking in the glow, until I realized I was more focused on how great a job I had done, and not enough on the prayers of everyone behind me and the touch of the Spirit that deserved the greatest credit.

It’s so easy to sprain your ankle on pride.

Given my checkered, awkward history, it is gratifying to feel like I’m capable of speaking to people and making a difference in the world. I know that the gifts God has given me are meant to be used in his service, and in the service of his children.

But it’s appallingly easy to slip into a narcissism that enjoys its own wit a little too much.

I would imagine that the complicated relationship between pride and the gifts and charisms we’ve been given is something that every person struggles with. But when that relationship plays out in public spaces, it seems to take on a little more urgency.

I have come to accept, grudgingly, that humility and pride are two sides of the same coin in my heart. I strive to talk myself down from pride, but when opportunities for true humility are forced upon me, I gnash my teeth. It’s just the nature of the beast, I guess. But when I see people who approach the public display of their gifts with grace and humility that seems effortless, I wonder if they, like me, are engaged in a struggle they try to keep hidden from the rest of the world. Or are they truly what I aspire to be, but fear I never will: genuinely humble people?