Girls are supposed to be into shoes. Right? That’s what I hear, anyway. I’m kind of an outlier. I have plenty of shoes, mind you, but nothing, nothing like most women. Having sold shoes for a couple of years, I’m all about function and proper support, which (let’s be honest) most women’s shoes are neither. If the shoe manufacturers of the world had only people like me, they’d go out of business.

My daughter is another story.

If it’s pink and feminine, you can bet she’ll love them. One year, we gave her black knee-high boots for Christmas. You would have thought the heavens had opened, she was so excited. It was our one and only unqualified success in buying gifts for Miss Julianna…ever. She goes around pointing out shoes with Anna and Elsa on them. Shoes that sparkle. Shoes that are black and dressy.

Any sort of shoes, in fact, that are unlike hers. Because this is what Julianna gets to wear: 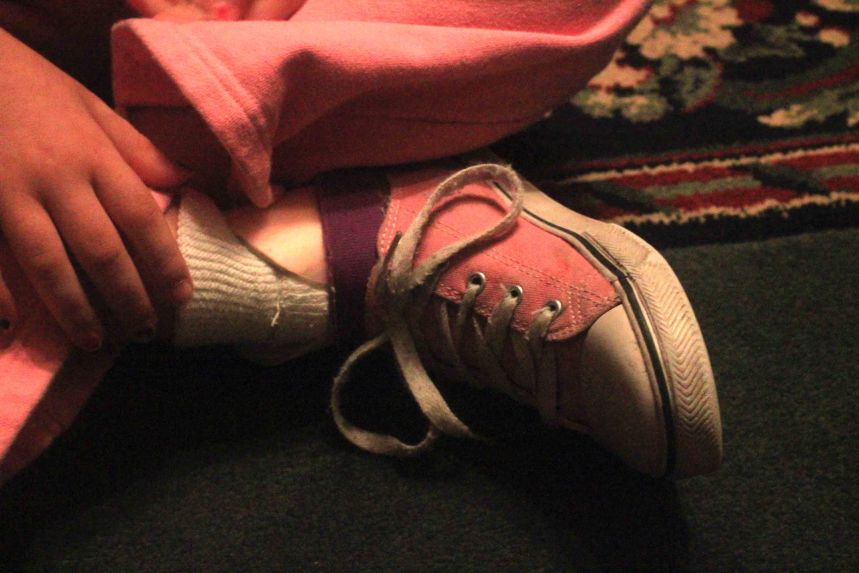 You see, if Julianna doesn’t wear her hard plastic, non-breathable ankle brace, she walks on the inside of her feet. I don’t mean flat footed. I mean that she practically walks on that bump on the inside of her ankle. It’s caused by the hypotonia (low muscle tone) that is part and parcel of Down syndrome, but very few of the kids I know who have DS have anything approaching this severe a pronation.

The PTs and orthotists have tried various shoe inserts over the years, but we seem to have settled on the “Sure Steps” brace: 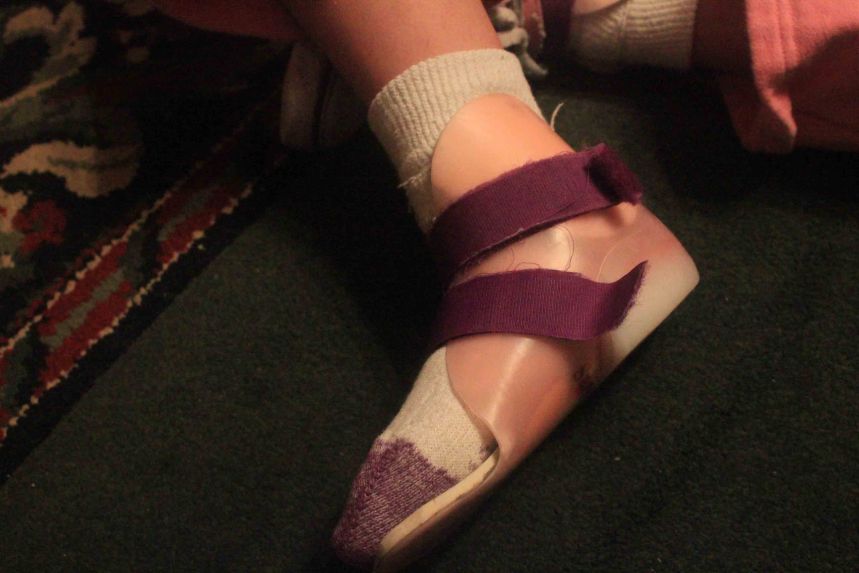 The problem? Well, there are a few. #1, they don’t breathe, and she has to wear them all the time, so I worry about what’s going to happen to her feet when she gets a little older, with the constant moisture and heat. #2, when you only have one pair of shoes, that must be worn every single day, it’s kind of a Thing when they get lost. And Julianna’s forever losing things.

What’s that? Why only one pair? Well, that brings me to #3: They are Really. Expensive.

I know this number because we got a bill for them a few weeks ago.

Now, up until this year I have sung the praises of our health insurance, because they kindly and without fuss paid for these inserts. There was so little drama about it that I didn’t realize until a year ago how important these inserts really are. The story goes like this: if Julianna walks on the inside of her feet, she will so badly stress her bones that they will eventually have to be surgically broken and copious amounts of PT undertaken in order to be able to walk, well, really at all. And eventually she’ll be wearing custom-made “clown shoes.”

It seems a no-brainer to me that her Sure Steps, then, fit squarely under “preventive health care.”

But apparently, beginning this year, the great insurers do not concur.

We got the new shoe inserts in late June. We learned in August that the claim had been denied (twice), despite the fact that the company had bought her at least four pairs before. And now, the saga of claims and appeals and arguments seems poised to drag most of the way to Christmas.

This is one of those things about raising a child with a disability that never quite becomes ordinary, no matter how long you live with it. The fact that she can only wear flat-bottomed, largely treadless skateboarder shoes without a deep cutout in the sole is a constant frustration to me, because there are so few things in the world we can give her as gifts, and pretty shoes are one of them–yet virtually every single one of those pretty pairs is off limits to her.

I’m not complaining, per se, but simply acknowledging part of our reality. This is one of those concrete examples of the support needed by families after a child with a disability comes along–the reason I challenge people who call themselves pro-life to think beyond the womb. The “up side of Downs” is a major focus of mine, but it seems only fair in a month dedicated to Down syndrome awareness to spend a few minutes acknowledging the pain-in-the-neck stuff that we deal with, too.

4 replies to The Trouble With Shoes