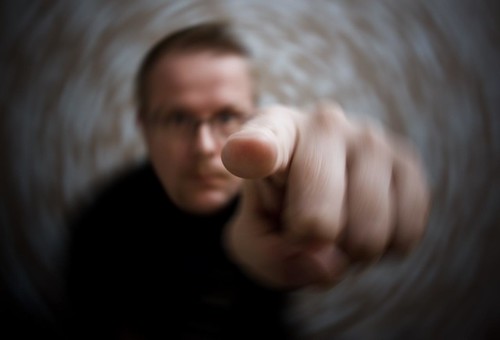 If you’ve been around my blog for a while, you’ll know that I’m no fan of the “blaming the victim” argument. In my experience, any time someone invokes that phrase, it shuts down discussion, just when discussion is what is most desperately needed. I think accusing people of “blaming the victim” leads to digging in at the extremes and not paying attention to the larger issues—whether it’s race, sexual assault, or anything else–which are always more complex and nuanced than the sound bites to which we reduce them.

On the other hand, I have had a song inflicted upon me repeatedly in the past year at Jazzercise which includes these lyrics:

‘Cause you’re too sexy, beautiful
And everybody wants to taste
That’s why I still get jealous.

This song makes me want to throw things. (Preferably, throw them at that annoying-falsetto-voiced singer.) Modern English includes a sentence structure that boils down something like this: Because you (insert character trait), I am thus incapable of controlling my reactions. By extension, then, clearly my actions are your fault.

It’s pretty blatant in this song, but I’ve taken people in my life to task for less. My kids are terrible. I’ll say, “Why did you hit your brother/take his toy/yell at him?” The answer is, of course, “Because he’s annoying me!” (Oh, obviously. Silly me. Clearly, he brought it upon himself, right? If he wasn’t so inherently annoying, you wouldn’t be irresistibly compelled to haul off and smack him.)

I have to fight it myself, too. When the kids say, “Stop chewing on me!”, for instance, my first impulse is to tell them if they weren’t so chewable I wouldn’t find it so hard to stop.

But in the end, it all boils down to this: we all have to take responsibility for our own actions and choices. We’re always going to be tempted to violate other people’s human dignity because something about them either bugs us or attracts us. But the responsibility for that violation is still on us–not on the person who tempted us.