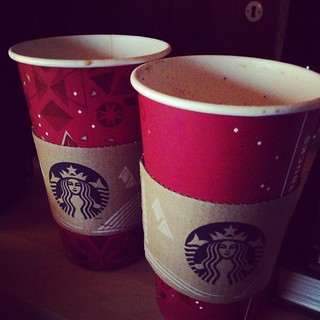 To my fellow Christians who are up in arms about the so-called “war on Christmas”:

There is no war on Christmas. Christian America quite successfully corrupted Christmas into a free-for-all greed fest without any help from people who hate religion.

And as for the rest…Does it really matter if Starbucks prints a red cup instead of a red cup with completely non-religious ornament shapes on it? Is anyone’s right to worship really being curtailed by the failure of the city to put a tacky light-up Nativity scene on public property? Have we forgotten that when people say “happy holidays,” they are actually, literally referring to a holy day? And why are we making such a hullabaloo about Christmas in the first place, when the reason for Christianity’s existence is Easter?

Credit, I believe, goes to “Wild Goose Festival,” via Facebook

There are plenty of things in this world worth raising the ire of those of us who profess to follow Christ. Violations of human dignity in many forms we’d rather not confront, because the fingers point back at us as often as they point elsewhere. Violence. Pollution and overconsumption. (See: disposable red cups.) Refugee crises, and the violations of human rights and dignity that cause them. Various -isms. A government full of politicians who can’t play well enough with others to do something as fundamental as pass a budget.

But no, by all means, let’s focus on the design of disposable cups and whether we say “happy holidays” or “Merry Christmas.” Priorities, you know.

And with that, I’m going quiet for the week. I need to circle the wagons and get some work done.