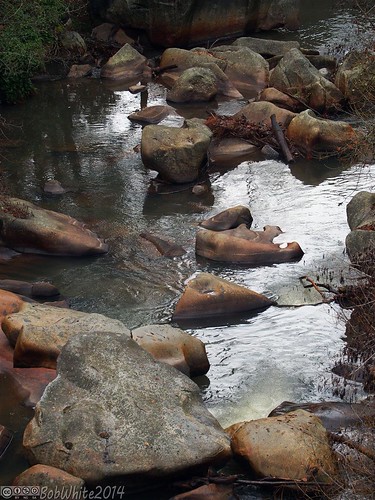 Blogging has been hard lately.

There are times when I have more to say than days in which to say them. Other times, I grudge every moment devoted to keeping up a blog. Lately, I’ve been getting far more response out of re-posting things I wrote two and three years ago than anything I have to say now. And the most important things I say, hardly anyone reads. It’s hard to feel motivated when I have no confidence that I’m going to make a difference when it matters most.

So I self-edit. I tell myself, “I can’t write about that, because no one will read it.”

I’m sitting in a creek bottom on a mid-December morning, typing these thoughts as I perch on a flat rock in a creek bed strewn with them, following the slow procession of the whispering wind from one bare treetop to the next. To be sitting here in December, able to type (i.e. not needing gloves) is both a wonderful gift and wince-worthy reminder that the earth is changing around me and I apparently have no influence to convince anyone to do anything about it.

As always, such thoughts swing around and point back at me. Who am I to be browbeating anyone about their choices and attitudes? I know mine leave as much to be desired as anyone else’s. How can I tell my kids half a dozen times a day, “You take care of you,” and still think I have any right to suggest to anyone else that something might be amiss?

And equally compelling, but tugging me the other direction, is the Facebook meme pops up with a quote that starts, “First they came for the Jews and I said nothing because I wasn’t a Jew…”

I can’t abdicate my responsibility to try to make the world a better place.

How do I balance those two contradictory truths?

Here, at the foot of the bluffs, where the layers of rock are laid down like slices of bread and the shadows of dormant trees fall fuzzy on the red-brown carpet of fallen oak and elm and sycamore leaves and stark on the gray rock face, I sit for half an hour in enforced silence and inactivity. It’s a gift I rarely give myself. When I saw the weather forecast this week, I knew I couldn’t squander the chance to come out, because it probably won’t come again for several months.

It’s impossible to sit in stillness for half an hour, or an hour, without becoming aware of the conflicts within. I come here with my heart in turmoil, and in the whisper of the wind and the trickle of water over rock, and especially in the focused pursuit of soul stillness, the coolness of a peaceful spirit returns. At least, a bit. I still don’t have answers, and I still don’t feel motivated to blog, but at least helplessness feels less irksome. And I’m sure the spiritual exercise will bear fruit in the hours and days to come. I’m sure, because it always does.

7 thoughts on “By The Creek”