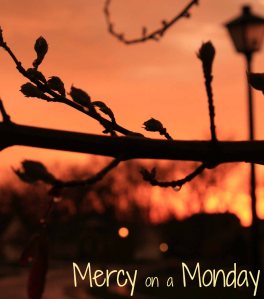 It didn’t take long for this list of ways to live out the year of mercy to nail me between the eyes:

It’s also my instant response when a political candidate gets on my nerves (daily, at a minimum), when a driver does something I don’t like, or a piece of technology causes me inconvenience. And it’s always aimed at the people behind those irritants, who should have been smarter and more polite than to bother Almighty Me.

I’m a word pictures kind of girl, and in the past month, mercy has come to be associated with something soft and cool, pliable, able to bridge the gap between square pegs and round holes. Sarcasm, on the other hand, is a hard, hot slap in the face. It raises hackles and solidifies them into brick walls. It makes both parties hard and unforgiving (in every sense). Brittle, as Monsignor Vlaun said in today’s daily reflection at USCCB.

Sarcasm is demeaning to others. It excoriates the soul and causes sensitive people to retreat into themselves. It shuts down communication. It might be funny, but the laughter only makes the belittling and the soul scouring feel even more belittling and soul scouring. It feeds bad feelings on both sides: self-hatred on the part of the victim and self-righteousness on the part of the one who doles it out.

It can be death on a marriage, in particular, and cause real pain to children, who only want to be loved, even when they’re completely clueless how to express that need appropriately.

Resist sarcasm; it is the antithesis of mercy.

I read those words and instantly vowed to change. And just in case there was any doubt that this was what I was called to do, the Holy Spirit gave me a big wakeup call the next day. It was in the van on the way home from school, and my mini-me responded to his little brother with blistering sarcasm, his tone dripping with contempt. It cut me to the soul, instantly and so profoundly that I even remember where we were on the route. Because this is my fault. I’ve taught them this.

I don’t remember what I said. I do know it was not a scolding; it was heartfelt and involved confessing my own fault in the matter. I told them part of what I was doing for the year of mercy was to quit being sarcastic.

The car was quiet for a few moments, which, if you’ve ever had three, four, five, or six kids in the car (as I do on a regular basis–am I not lucky?), you’ll know is no small thing. You don’t always know when a sea change is taking place in your life, but I think one began in that moment. And although my own intentions are good, I don’t think the credit really belongs to me. Why? Well, because I’ve realized something in the couple of weeks since that exchange.

You know that old saying about how parenthood means having your heart walking around outside your body?

Well, I think God gives you children in order to make sure you have a conscience walking around in someone else’s body, commenting out loud on your foibles. In this case, the body of my six-year-old.

“Mom, are you being sarcastic?” Nicholas will ask me.

“Mom, I think that was sarcastic!”

“We-ell, that was sort on the edge. It was more like a joke.”

It’s been good for me. It’s making me stop and think before I share the effervescence of my own wit.

I don’t like it. But I can feel the difference. I’m not so angry, so volatile, like a pump primed and ready to react to the slightest provocation. The inside of my chest feels a little cooler and settled, more relaxed, more open. It feels like growth. And that is, after all, what I’m going for, in this year of mercy.

2 replies to On Sarcasm, Mercy, and having your conscience walking around in the body of a six-year-old