My title today probably evokes an instant reaction. Everyone is well aware of the nosedive in common courtesy—a baseline standard for treating others with mercy—shown by the candidates in this presidential election.

And lest you think I’m aiming this only at one side of the Great Political Divide, let me say that I have only watched one debate this year. The Democratic candidates had me cringing and writhing so acutely, I had to turn off the TV after 45 minutes. (I haven’t had the emotional strength to attempt a Republican debate.)

Civility doesn’t garner hits; respect gets you ignored. It says a lot, none of it complimentary, about the kind of people who aspire to high leadership roles in this day and age.

But blistering the candidates for their lack of civility (i.e., baseline mercy) is an easy idol we throw up in order to avoid confronting a much more unpleasant reality:

We’re not treating them with civility (i.e. mercy), either.

A few days ago someone on my Facebook feed pleaded with us to ask ourselves if we would say the things we’re saying if the person him/herself was standing in the room to hear it.

We all need to take that question to heart…and then take it one step further.

After all, people didn’t start pursuing this brand of politics because they like being horrible to others. They did it because that’s what we respond to. They turned debates into “reality” TV, devoid of substance but rich in the worst of human nature, because that’s what garners ratings. America loves shows in which people’s human dignity is shredded, in which they are called names and kicked off the team/island/show, in which women or men are pitted against each other (and frequently, if the things I hear from people who are addicted to these shows, asked to do incredibly degrading things) in order to win the guy/girl–even though the success rate of the relationship is abysmal.

We are the culture, and if our culture is devoid of mercy, it is because we have made it that way. 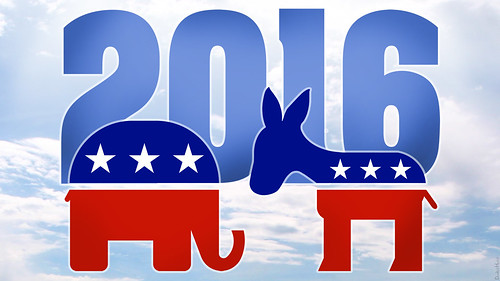 This presidential election is what we have asked for, via the choices we’ve made in entertainment, by the things we have chosen to make bestsellers and worldwide sensations. It is a cultural shift that we have caused by filling our Facebook and Twitter feeds with judgment, sweeping generalizations based upon a sliver of the full story and without any attempt to enter into someone else’s chaos, and lack of respect for those who see things differently than we do.

Our politicians don’t seek solutions and compromise anymore because we have quit trying to understand where others are coming from.

Please understand: I am speaking to myself here as much as I am to anyone else. I cannot deny that Donald Trump frightens me as no candidate has ever frightened me before. For the last several days, while this post has been stewing, I have been struggling with that question posed on my Facebook feed. If Trump did somehow appear in my living room, how would I speak to him? I could not in good conscience remain silent, but how could I say to him the things that need to be said and still honor his innate dignity as a human being?

It is not an easy thing to apply mercy in this arena, when all the voices around you are shrieking, interrupting, not listening, and playing fast and loose with the truth.

But we, as Christians, are called to be the yeast that leavens the whole loaf. Even when it seems hopeless. Even when our passions are crying out to the contrary.

I might fail—and fail spectacularly—but that doesn’t absolve me from trying.

Holy Spirit, in this election year, touch us with your grace. Help us to act and speak from the best we have within us, instead of the worst.

*Note: I would love to have conversation on this topic, but please, please, please refrain from turning it into a political debate. This is about mercy, not candidates.