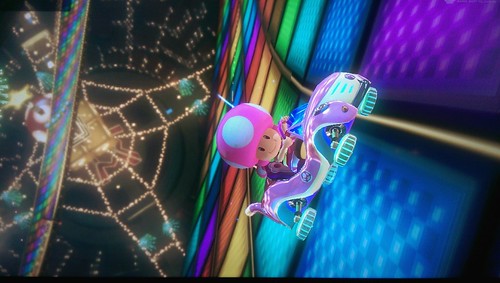 We have a tradition of family game night in our house. Actually, “tradition” is a little strong. We made a commitment to devote Friday nights to this purpose, but our success rate is about 40-50%. (AKA “better than nothing!”)

It’s supposed to be a no-technology night. But the kids have been begging for a “family video game night” for months. Since I never even played video games as a kid, I have always resisted.

Still, this Friday was a big day in my world. I found out I got two requests from literary agents on my novel via Pitch Madness: Mario Kart.

So I was feeling expansive. And a bit curious, too, because I had never actually paid attention to Mario Kart, and so my team— “Rainbow Road”—and my agent bids— “star” and “mega mushroom”—were nothing more than amorphous hovering objects which I know you occasionally are supposed to run over…although what you gain from it I have no idea.

I was also feeling expansive because Alex had been poring over my computer screen after school, looking at the symbols and asking me to explain what a “query” was, and what “three chapters” or “full” or “ten-page critique” meant. It was a rare moment in which our overarching interests aligned.

I decided, Why not have a family video game night?

So Julianna and I sang Aladdin on the Disney Sing It game (I am chagrined to admit that I, the semi-professional singer, only got 3/5 stars…on EASY. Then again, they expected you to sing both parts of the duet, even when they overlapped), and the guys played Wii baseball and tennis, and then we put on Mario Kart. I said, “Hey, show me Rainbow Road, so I know what this thing looks like!”

So Christian and I sat on the couch and watched our three youngest children repeatedly launch themselves off the edge of Rainbow Road and burn up on re-entry. I haven’t laughed that hard in a long time. It was less funny when Julianna asked me for “help,” and I started burning up myself.

And then, Christian found the Zurg blaster and decided to spice up the game even more by shooting foam balls at the kids and the TV, and…

Why yes, in fact that is a picture tube TV.

Oh, it was a good night. And just as we came round the last bend, Alex cried, “Mom, THAT’S a mega mushroom! Get it! It makes you HUGE!”

Ah, the moments when all disparate pieces of your life converge upon a single point…