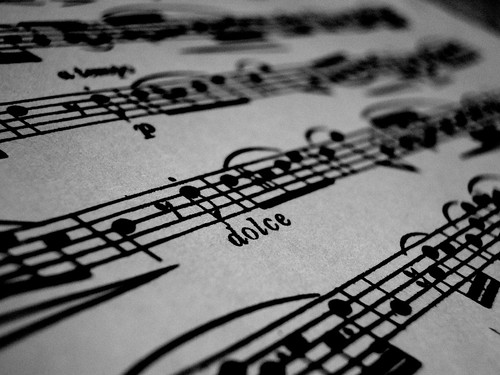 Occasionally, someone asks me when I’m going to record an album. I always hesitate to answer, because even though I know I’m not a good enough singer to record an album, it seems kind of…ungracious…to contradict people who obviously think otherwise. But there’s another reaction that I never quite know how to explain—a deep, visceral recoil. I am a leader of community song and a facilitator of beautiful music. I am not a rock star—either in the literal or the metaphorical sense.

I haven’t always felt that way. When I was in school, it was a matter of extreme angst to me how much time I spent on piccolo or second flute instead of principal. I really craved those solos.

But gradually I realized I like playing second. There’s a different kind of intellectual and musical challenge involved in immersing yourself so deeply in someone else’s pitch and tone that you simply disappear. There’s magic in those moments, a thrill that I find much more satisfying than the stressful adrenaline rush of the spotlight.

Getting deeply involved in pastoral music really crystallized that. As a liturgical flute player, the goal is not to draw attention to myself, but to add color and beauty, to touch the heart and draw it closer to God. In that context, music serves the words—an idea that once made me grind my teeth. But now it seems inevitable and utterly right. Music makes it possible for words to imprint permanently on the soul without effort.

The last few weeks, I’ve been playing second flute on Prokofiev’s Alexander Nevsky (pronounced Nyevsky, in case you’re wondering) and fourth flute on Stravinsky’s Symphony of Psalms. The last time I played the Symphony of Psalms, I was playing principal. After twenty-two years, my fingers can still trace the finger patterns of the solos. And yet it’s been at least as fulfilling this time around. Perhaps more so, because I can really feel that I am a part of the tapestry, a part of something much bigger than me.

See, the world of a novelist/feature writer is very isolated. Yes, you do interviews, you have critique partners and editors, and eventually you invite people into your world. But no one ever immerses themselves in your world as fully as you do. Not even other writers want to delve that deep with you.

Music is totally different. You may practice in isolation, but you can’t play the Symphony of Psalms by yourself. You need five flutes, five oboes, 3 bassoons and a contrabassoon, two pianos, harp, a huge array of brass, and low strings—and that’s before we mention the singers (and the conductor!). Music is defined by its communality. We all delve into the experience together, dependent upon each other. People who have never met can rehearse for a few hours and suddenly discover that they can match pitch and note lengths, sometimes without exchanging a single word to make it happen. Music communicates at a level so much more visceral, so much closer to the soul, than words alone.

I used to resent accompaniment parts. But these days I love them—even those ridiculous sustained notes, the ones where whole notes are tied together, followed by a whole note tied to a half note, and two halves tied over a bar line, and why are you even re-articulating the same note anyway?

You can see those dark “page turn” spots in the corner

I can see now the dimension and shape in those notes, and even if nobody in the audience notices the difference, they’ll feel it. I no longer mind playing in the mid-register where I know it’ll never carry over the orchestra, because I recognize I’m part of something so much bigger. I love that sense of being one puzzle piece in a beautiful picture. You could still see the picture if one piece is missing, but only when every piece is in place is the full beauty revealed.

And it’s bigger than our one performance, too. The Symphony of Psalms is a rental piece, so my part came into my hands bearing notes from the person who played it last—and dark spots at the bottom of each well-worn page, where countless fingers not so different from mine left their mark while turning pages on stages not so different from the one I’m using, surrounded by the same glorious sound.

Best of all was the fact that last night, when I arrived for the concert, I did not arrive alone. I had Nicholas with me, and we’d had a bona fide “date night” dinner at Taco Bell, just the two of us. He got to sit in the audience, with a real live, paid ticket. He got to come up afterward and go backstage with me. See the tight spiral staircase that accesses the catwalks. Go down the steep, narrow stairway to the dressing rooms beneath the stage. Meet and talk to Jane Bunnell, who sang the gorgeous “Field of the Dead” solo in Nevsky. (And his compliments to her were both effusive and unprompted, which was the coolest thing of all.)

Last night was one of those nights when I was reminded how big and beautiful and interconnected and, especially, how rich music has made my life. And getting to share it with one of my children—and this child, in particular? That made it a perfect night.