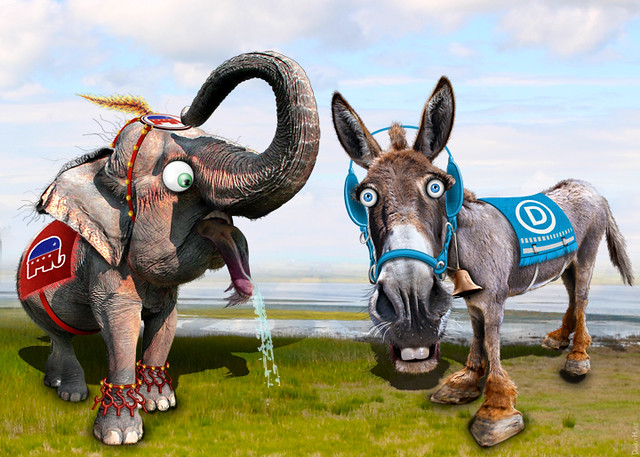 For the last four or five months, Trump has been calling me 2-3 times a day from a 646 area code. First I answered it, thinking it was my sister because it was a New York call. Then I ignored it. Then I answered and yelled into the phone, just to see if it might provoke some unexpected reaction in the automated message…like sending me to a real person, who I could tell to take me the bleepety bleep off the call list. (It didn’t.)

Then came the surveys. I lost patience last election cycle because the pollsters wouldn’t allow for a single bit of nuance. They insisted upon black and white answers. Which I get, except that the polls = the news = the only reality most people recognize, so I’m not about to feed into a “the world is black and white” mentality. (News flash: IT’S NOT.)

And then there were the push polls, in which “haven’t yet done my research” was regarded as justification for throwing out questions like, “If you heard that Deplorable Candidate B did (gross distortion of reality), would that make you choose Deplorable Candidate A?” After about five or six of these, I said, “I am not going to get my political news from someone who clearly has an agenda.”

No, actually what I said was, “Look, it’s clear to me that you’re trying to push me toward Deplorable Candidate A and I will not be pushed, so I’m hanging up now.”

Fortunately they seem to have defaulted to automated surveys, and those I will take, because I figure if the polls actually push the news, then I have a responsibility to push the polls in as accurate a direction as possible.

But the ones that keep calling over and over? I don’t want to mess with it. Nor do I want the “missed call” showing up on the caller ID. So now I hit “talk,” wait one second, and hit “end.”

This week, however, I was waiting for some calls, so I answered everything. And I got this call: “Hello, can I speak to Christina Baaaaaa-si?”

I was just in a sassy enough mood to say, “There’s no Christina Baaaa-si at this house. There is a Christian Basi, but since you obviously don’t know us well enough to know that, I’m assuming this is a political call we don’t want to take, anyway.” And I hung up.

About two hours later it occurred to me that those poor people are just doing a job, and that wasn’t a terribly mercy-filled response.

Clearly, politics brings out the worst in everyone, not just candidates.

2 thoughts on “How I Do Political Season”