Do you ever have that feeling that there’s just too much going on? No, of course not, she says (wink-wink). This summer hit me like a Mack truck, and the grace in it was that I was so focused on two weeks in July–my week at NPM in Cincinnati and our trip to Colorado last week–that I didn’t have any time to spend calculating how much other work was getting shoved off to the side. If I had really processed how much there was, the stress level would have skyrocketed.

My poor kids have two weeks of summer break left and it’s the first real unstructured time we have. We needed one day for recovering from twelve hours on the road–day 1 we saw moose at Sprague Lake, I battled Nicholas and Michael on the aerial course, we had lunch and souvenir shopping, and THEN drove 6 hours in 7 hours. Day 2 we got up, ate breakfast, and drove 6 hours in 7 hours. And then did eight loads of laundry and went to a birthday party for the baby of a choir member. So yeah, we needed Sunday to recover. And Monday.

By Tuesday, they were “all war zone, all the time.”

And me, in the meantime? 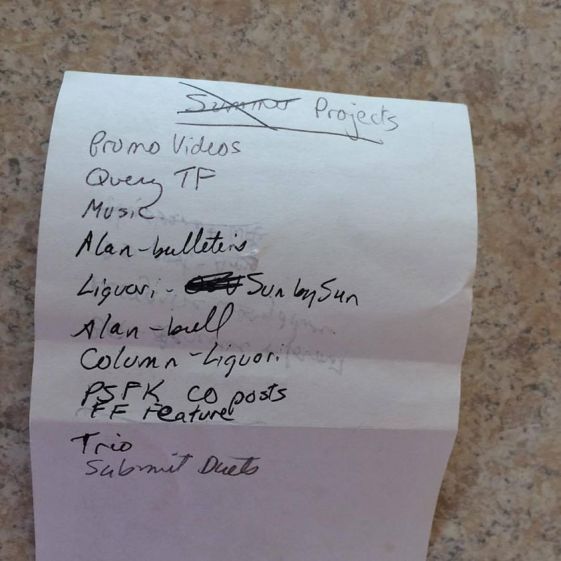 I knocked out my first two deadlines on Monday and Tuesday–the shortest two. Some of the other tasks on my to-do list are gargantuan. It’s easy to say, “Query Trust Falls.” What that line item doesn’t tell you is I have to write a synopsis. And take the list of upwards of a hundred agents I’ve been collecting for the last two years and organize it and figure out which ones are the best match. Then agonize over the query letter and make sure it’s as compelling as it can possibly be, with the right balance of, well, everything. And only then comes the querying itself.

It’s also easy to write on that list, “Trio.” But writing a piece of music is not a short process. I will likely spend three or four months working on that.

So I view the upcoming school year with a mixture of emotions. On the one hand, all the kids will be in school all day for the first time. (Hurrah! Uninterrupted days to work!) On the other, homework season is starting. The reading assessments that ended 3rd grade underscored to us that we’ve really underserved Miss Julianna, and we can’t do it anymore. We’ve GOT to figure out where to scrape together 15-20 minutes a day for reading comprehension, and when the speech therapist sends home that 12-page packet that says “do this list of words 3x a day for a week, then do this list 3x a day for a week…”…well, we really need to do it.

Such things make me feel like whimpering. It makes me miss this even more:

When this round of deadlines clears out I have to take a clear-eyed stock of what I commit to and be more realistic.

That’s the state of my world right now, and I know no one’s all that interested, but I debated not blogging at all today because I just remembered (I’ve been working on agent lists this morning!), and I have a flute duet rehearsal any minute, so I decided it was the type of day that calls for a stream-of-consciousness post that only takes 12 minutes to write.

3 replies to The State of an Author-Composer’s World