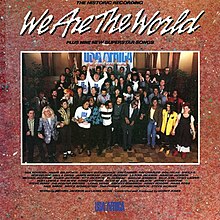 This weekend, exhausted, while our kids were well occupied with their screen time, Christian and I were lying across our bed and hanging out when Christian ran across this video on Facebook:

I haven’t thought about “We Are The World” in years, and I don’t think I ever saw this video. It was so interesting to me on so many levels–watching them all dart forward and back with music in hand to record their solos.

One of the first things I thought was, “why does Michael Jackson always sound like there are five of him?” Clearly it’s an audio effect, but why does MJ get it and no one else? So interesting.

Even more interesting to me was realizing that the nicely-blended choir that sings the chorus is in fact, made up of the soloists. As long as I have been hearing this song, I assumed that was a completely separate choir. Because, you know. Cyndi Lauper. Bruce Springsteen. Ray Charles. Kenny Rogers. These are extremely distinctive voices

When this song came out I was a kid, and musical aptitude notwithstanding, I never thought about the difference between “real singing voice” and “performance voice.” Now that I’ve spent almost twenty years as a church choir director, and more particularly since I’ve been doing Jazzercise (frequently gnashing my teeth at the vocal abuse displayed by pop stars in the songs we dance to), it all strikes me much differently. Whenever I hear Rihanna or Megan Trainor or Beyonce sing, I think, “I wonder what they’d sound like if you were sitting next to them in church, singing the Old Hundredth?” Because there’s no way they’d be doing all that catch-breath-ing and groan-singing and vocal gyrations.

Watching the video to “We Are the World” was really an eye-opener about how much difference there has to be between these people’s “solo” voice and their natural singing voice. Because all those solo voices could not possibly blend into a choir that sounds just like every other choir in the universe.

Then, being almost as susceptible to rabbit holes as everyone else is, we ended up clicking through to this video:

I found this one really interesting, first, because of how long it took Cyndi Lauper to finally reach that distinct “woa-woa-woa” that stands out in the song, and second, because of the clear musical competence of the people involved. I know people are people and all that, but still, you tend to put stars into an “other” category, and what struck me as I watched this was how much this sounds like some of the rehearsals I’ve been part of, with really good musicians coming up with harmonies and playing around with pitch variance and trying different solutions to “that doesn’t quite feel right yet.” It made me realize even though these people are platinum stars and I’m a work-at-home-mom and church musician, we’re the same at heart. I could have a competent conversation with these people and not feel like I was out of my league.

And that was kind of cool.

One thought on “A Blast From The Past, viewed through new eyes”