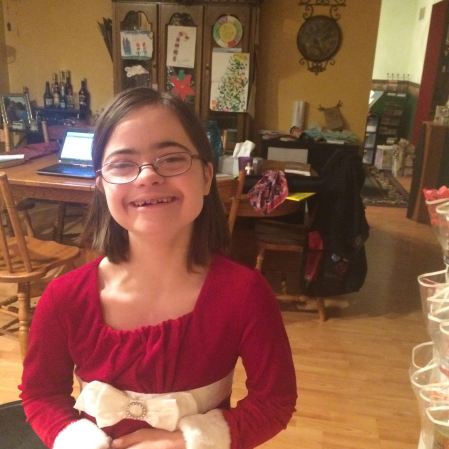 It’s almost too complicated a story to explain. A group of parents were meeting Friday after school, at the Starbucks inside Barnes & Noble, to discuss a topic of mutual concern while the kids perused the books and toys. When it was time to go, I sent Nicholas to get Julianna from the children’s area, where she was looking at books and trains. “She told me no,” he reported back.

“Well, go and tell her she doesn’t have a choice,” I said, and began packing up. But by the time I took my leave and headed toward the children’s area, I met Nicholas coming back, saying, “She’s gone!”

I knew what had happened. She’s like the boy in the Gospel story. She says “no” but then later (in this case, within a minute), regrets it (or in her case, cognition catches up) and sets out to comply. Only she didn’t know where I was, because when we’d entered the store, she’d gone straight to the children’s section.

I expected to find her in two minutes or less. We’d barely started when the mother of Julianna’s school friend, who works in the store, came up to me and said, “Hey, how you doing?”

“You want me to call a Code Adam?” she asked.

I almost said, “No, she’s here somewhere.” But then I thought: We are due at Christian’s work party at six, we still have Giving Tree shopping to do, and I have a lasagna in the oven at home.

Three minutes was long enough for the Barnes & Noble staff to determine that Julianna was not in the store. I went out to the van on the odd chance that she’d gone looking for us there—not that she could have found it—and as I turned around to run back to the store, a complete stranger flagged me down. “I saw her,” she said. “She came to the door, but then she went back inside.”

Inside, I found three other mothers, eight kids, and Julianna’s friend’s mother waiting for me. The moment they saw I was alone, they started splitting up the various wings of the mall—and Ms. M. called mall security. I gave my super-secret cell # to the mom who volunteered to wait at B&N with Alex, and then I dragged Nicholas and Michael out into the mall.

We checked the carousel, the bathroom, and the costume jewelry store before we got to Kidz Court and found a security guard checking there too. I went on to JC Penney and then back to Shoe Department, checking with the people at the mall entrance to make sure she hadn’t come in. We were getting ready to head for Target—because Target is our usual Mall destination—when Alex and another security officer intercepted us. “I’m shadowing the mother,” he said into his walkie, and steered me toward Game Stop and Santa Claus.

I couldn’t think why on earth she would be in either of those places, but it was clear they had a whole lot more experience at finding lost children than I did, so I didn’t argue. “She’s probably just talking to people,” Alex said as we power-walked down the main corridor.

I nodded. This is the common knowledge in our family: the problem with Julianna is not that she gets lost. It’s that she doesn’t know it. “I think we’re about to find out how long it takes Julianna to figure out she’s lost,” I said.

As long as I was thinking and problem solving, I didn’t have mental power for doomsday thoughts. This was about the time I thought: Christian’s work party no Basis because the Basi family is at the police station waiting for—NO! Chill. She’s fine! We’ll find her soon. She’s here somewhere.

The security guard went to talk to Santa and I went on to the woman at the makeup counter at Dillard’s. The guard came up behind us and said to her, “Can you call your security chief and ask him to check his security cameras for her?”

Oh, I thought. What a good idea.

We were halfway back to the main intersection when the call came in: “We’ve got her. She’s at Target.”

That was about the time my dying emergency-only flip phone rang; the mom who had stayed at B&N was calling to let me know the same thing.

When Julianna arrived where we were waiting for her, it was with a huge smile and open arms and great big giggles: “MOMMY!”

Alex and I looked at each other and laughed and sighed and shook our heads. “She didn’t know she was lost,” we said.

My mother-compatriots and the three security personnel were all like, “Are you okay? Do you need a cup of coffee? A drink of water? Do you need to sit down?”

“No, I’m good, we just need to go get our Giving Tree shopping done,” I said, and then thought: They must think I’m a complete sociopath.

And maybe there is something wrong with me. But it was much scarier, losing her in Kansas City. This time, she wandered off in a place where she knows her way around. She’s unbelievably spatially smart, especially considering her other cognitive difficulties. I’m not afraid that she’ll wander off into the middle of nowhere, because she likes people. She gravitates toward people, and sooner or later where there are people, she’s going to get found.

I knew this to be true, but I did not know just how true.

The next morning, we were at Breakfast With Santa, put on for our Down Syndrome family network. I shared this story with another mother. “Oh,” she said. “You know, (fellow DS group member) sent me an email yesterday saying, ‘I’m here in Target and Joanna is here without her mom, do you have contact info’? But I was like, ‘who’s Joanna’?”

And the day after that—Sunday morning—I was walking to the copy room at church to make copies of the music list before Mass when the religious ed director said to me, “Oh, I just got two emails from (teacher’s aide in Julianna’s religious ed class). She said, ‘Julianna is at Target without her mom. Do you have contact info?’ But I don’t check my email on the weekends, so I just got the messages.’”

I live in a city of 120,000 people. Not gargantuan, but also not the kind of town where everyone knows everyone else. This is the only mall for miles around, and people shop here from countless tiny towns in at least three of the four directions. Especially in December.

It was eye-opening—awe-inspiring, even—to realize that even in these circumstances, there are people who know us and care about us. And to realize that at any moment of crisis, my friends—friends I hardly ever get to talk to, because life is life, you know—have my back.

4 replies to On Losing A Child, Recognizing the Value of Friends, and the Humbling Realization That Everyone Really Does Know Who You Are