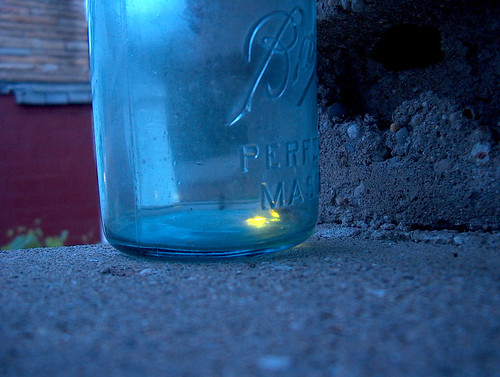 When I was little, the fireflies were everywhere. I remember trekking through the tall grass north of the house to the pond with my cousin and catching one to bring back and put in a jar, where we watched it all night. Apparently as a child I wasn’t as creeped out by the prospect of ticks as I am now, because I’m pretty sure I was wearing shorts. Maybe the vividness of that memory comes from the fact that this cousin was my first-ever best friend and since she lived on the west coast, seeing her was a once-every-other-year occasion.

In the past decade or so, I had thought that my memory of the fireflies was skewed by time and by the tendency of a fanciful child to enlarge all enchanting things. But there was a night, a few years ago, when Christian and I stood on the deck looking down over the lawn and the deep, dark places in the woods, at the profusion of silent lights blinking lazily. I said, “This is what I remember. Why isn’t it like this all the time?”

Not long after, I found out that there really aren’t as many fireflies as there used to be. Mostly it has to do with the destruction of habitat and the uptick in light pollution. There’s also some speculation that the “fogging” done by cities to discourage mosquitoes also discourages fireflies. But it hasn’t been studied a whole lot yet, as best I can tell.

It’s hard for me to accept the thoughtlessness I see unfolding around me in people’s interactions with the world. It’s much bigger than the fireflies; they’re just an example that comes to mind at this time of year. I don’t think the people who sit with their cars and air conditioners running for half an hour in the parking lot while their kids take swim lessons or piano have hostile intentions toward the world. I think they just don’t want to put up with any discomfort. I don’t think the people who dump huge amounts of recyclables in trash bags bound for the landfill are hell-bent on squandering the resources and the space that make this precious world so beautiful. I think they just don’t think it through and live intentionally.

And that’s really the key. We’re so used to our comfort, our convenience, that we aren’t intentional about how we use things. We get so caught up in our TV shows and our social media and whatever other “strange gods,” as Elizabeth Scalia put it, that it doesn’t occur to us that every single action we take, or don’t take, has a ripple effect on the world.

Nothing we do is without consequence.

Pope Francis is due to release an encyclical next week on climate change. I’m really looking forward to seeing what he has to say, and I’m praying that it makes a difference.